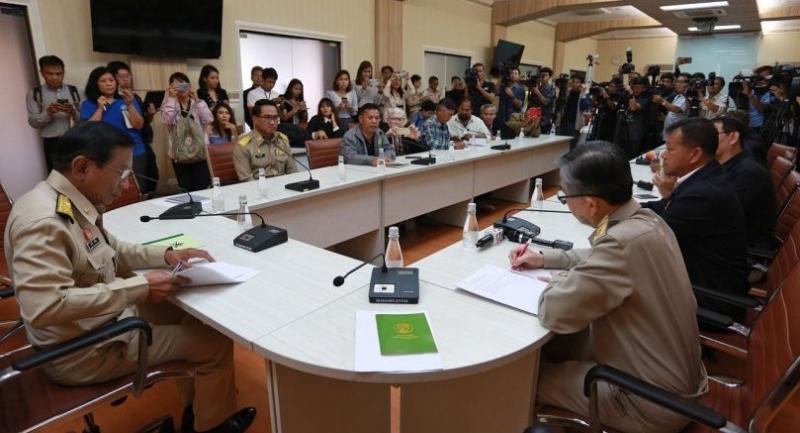 By KANITA SEETONG
THE NATION

REPRESENTATIVES of rubber farmers yesterday demanded that the governor and all board members of the Thai Rubber Authority (TRA) be dismissed over falling rubber prices.

Wreaths were also laid at the Ministry of Agriculture and Cooperatives in a symbolic protest against the TRA’s leaderships.

“Their management mistakes have hurt rubber prices,” Utai Sornlaksap, head of the Thai Council of Rubber Farmers Networks, said on behalf of rubber farmers, some of whom accompanied him. Agriculture and Cooperatives Minister General Chatchai Sarikulya turned up to accept the letter of protest in person.

He has reportedly agreed to address their demands and more meetings with rubber farmers have been promised. Last Friday, Tanomkiat Yingchuanan – an adviser to the network of rubber farmer groups – said rubber farmers from across the country would join the protest over the falling rubber prices. He also openly directed criticism at Chatchai. Tanomkiat, however, was taken to an “attitude-adjustment programme” at a military camp over the past weekend, along with other key leaders of rubber-farmer protests. As a result, many farmers cancelled plans to attend the planned rally.

Chayanin Kongsong, a rubber farmer leader in Nakhon Si Thammarat province, said the military had asked for cooperation in not staging protests.

“Although I cannot attend the activities in Bangkok, some rubber farmer leaders have turned up at the Agriculture and Cooperatives Ministry as planned,” Tanomkiat said.

After being released from the military camp, Tanomkiat and his supporters had called on Trang Governor Siripat Patkul instead to ask that he forward his letter to the National Council for Peace and Order (NCPO).

The head of the NCPO is Prime Minister General Prayut Chan-o-cha.

According to the letter, the TRA should withdraw from the Thai Rubber Joint Venture Co Ltd that it established earlier this year in collaboration with five major rubber firms in the hope of influencing prices in favour of smaller-scale rubber farmers. The joint venture had proven a failure.

The letter also suggested that the Ministry of Agriculture and Cooperatives closely monitor whether government agencies have followed government policy to promote the use of Thai rubber farmers’ products, and report their progress to the public.

At the meeting with Tanomkiat, Siripat expressed readiness to allocate Bt1 million to spend on organising forums to listen to farmers’ opinions.

“We will use information in formulating solutions that truly respond to their needs,” Siripat said.