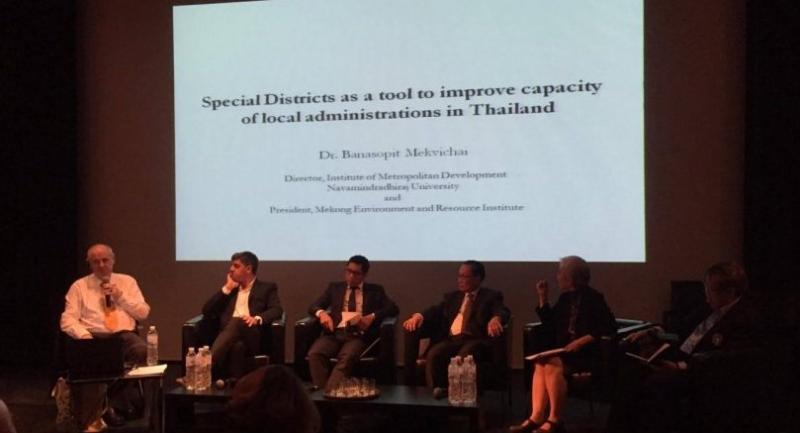 CITIES IN the Mekong River region are facing common challenges from urbanisation, experts say. These cities are seeing their heritage roots disappear as they grow too quickly, and their residents don’t have the chance to set their own path for urban development.

The experts on urban design and planning from Thailand, Laos, Cambodia and Vietnam discussed issues affecting the major cities in the region in a forum titled “Cities in Transition in South East Asia, New Challenges for Urban Development” at Alliance Francaise de Bangkok.

At the forum, urbanisation trends in Bangkok, Chiang Mai, Vientiane, Luang Phrabang, Phnom Penh and Ho Chi Minh City were discussed and it was noted that the problems these cities faced were very similar. However, each city had its own method of dealing with those problems.

One of the major concerns was the rapid urbanisation that led to the authorities and business sector harming the city’s inherent character.

Examples of this problem in Bangkok included the Chao Phraya Riverside Promenade Project, which some say will destroy the identity and history of riverside communities, and the Mahakan Fort Park Project, where the traditional local community has been forced to leave the area.

The city is becoming increasingly famous among tourists, which has boosted the local economy but also had negative side effects for the traditional livelihoods of its citizens.

“As the city experiences a boom in the tourism industry, there are many new hotels and entertainment places for the tourists. The local people are alienated in their hometown and many choose to leave,” Bounleuam said.

“Right now, both NGOs and the authorities are trying to preserve the cultural identity of the city and focus on helping the local communities to survive.”

Clement Musil, a geographer and urban planner, said that Ho Chi Minh City’s rapid growth had already generated conflict between local people and the authorities over claims of unfair land expropriation, as the city needed more space to expand.

However, the former dean of Chulalongkorn University’s faculty of architecture, Bundit Chulasai, said that cities had a life of their own and changed over time. This raised the topic of how the past could coexist in harmony with the present.

Bundit pointed to the example of Chiang Mai, which taught us that sometimes we did not have to greatly interfere with the development of the city as it would be able to develop at its own natural pace.