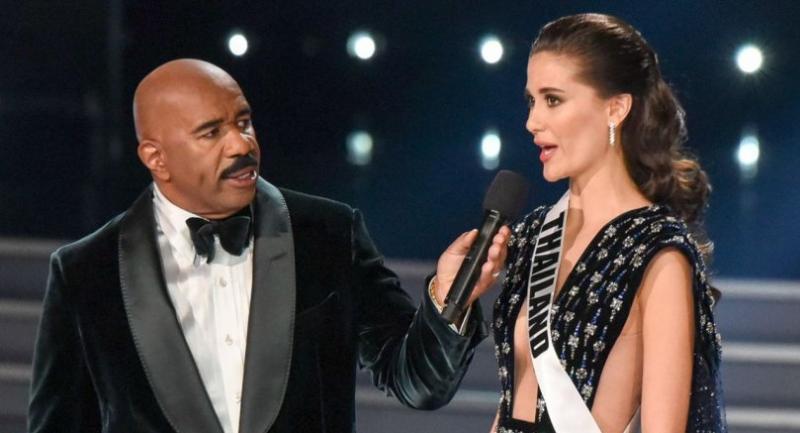 MARIA POONLERTLARP has tearfully apologised to her fans, despite coming in the top five in Miss Universe 2017, the world’s biggest beauty pageant, Thailand’s best finish for three decades. She became the first person from Thailand to make the final five since Porntip Nakhirunkanok Simon, who was crowned Miss Universe in 1988. Last year, Chalita Suansane made it to the top six. Colombia’s Laura Gonzalez was first runner-up with Jamaica’s Davina Bennett behind her.

The 25-year-old Thai had been a favourite throughout the competition, often standing out among the 91 candidates.

For the finals, she wore a stunning midnight blue silk velvet gown embroidered with dazzling Swarovski crystals created by the Thai brand Asava, which was inspired by Her Majesty Queen Sirikit’s outfits. Maria holds a bachelor’s degree in international business from Erasmus University in the Netherlands and a master’s in marketing from the Stockholm Business School in Sweden.

Her father is a Swedish engineer and her mother a university lecturer, while Maria herself is fluent in Thai, Swedish and English.

She has modelled professionally since she was 13 and acted occasionally. She also released the song “Boong” in 2010 and later had a modest hit with “Come Along”.

Maria had been the centre of attention since the contest began, with her charming personality and looks. For the national costume section, she dressed in a specially designed Thai outfit under the theme “Making of the Chasing of Light” or “Mekhala”, inspired by a Thai tale about the origins of lightning and thunder from a story in the epic poem Ramayana. There were two figures incorporated in the costume – Mekhala was shown as a puppet, while Maria’s costume was the character of the god of thunder in a modern style.

In the last question and answer section, Maria was asked: “What do think has been the most important social movement of your generation, and why?” She replied: “I think the most important social movement so far is our ageing population, though the most important movement of our time is our youth. Our youth are our future. We must invest in our young people because they are the ones that will look after the Earth and the elderly.”

The beauty queens with the highest number of votes in the competition received a guaranteed spot in the top 12. In the final round, the judges focused on the contestants’ personalities.

During the final hours, the volume of Maria’s votes had leapt, surprising many international voters. One reason was that the popular and influential singer, Peck Palitchoke, had tweeted a request for his fans to vote for her. After the final result was announced, some fans criticised Maria for addressing “social issues” while not directly answering a question with details about “social movements”.

Maria said earlier that issues affecting young people were one of her special interests. “I never thought of a beauty pageant as the end goal,” she said in an interview with The Nation in August. “I realised that people listen to you because of the title you hold, so the question is what should you do with that. I want to open a foundation or an organisation that helps the community. For me, it’s more about what comes after that, what it really stands for.”