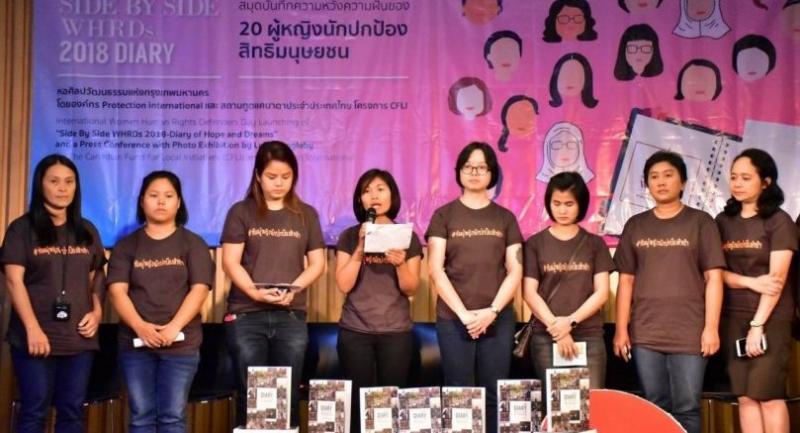 FEMALE ACTIVISTS from every corner of Thailand have been victims of discrimination, lawsuits and threats to their families, Protection International has revealed.

Being a human rights activist was harder for women, as many of them had to look after their families and make a living while maintaining an active role campaigning for justice and basic human rights, the organisation’s coordinator, Pranom Somwong, said to mark International Day for Women Human Rights Defenders last Wednesday.

Pranom said that, during the past year, threats against female human rights defenders remained severe, even though the women were less likely to suffer severe harm – such as assassination or kidnap – than their male counterparts. Women were impacted by the loss of family members, lawsuits and hardships to maintain their families while being threatened.

“From the stories of women human rights activists across the country, we found that they are living in great distress,” Pranom said. “Not only do they have to face danger from their activism, they have to take care of their family. In the meantime they have a duty to go to court, gather evidence for their cases and earn money for litigation.

“Moreover, we have found that since the National Council for Peace and Order (NCPO) came to power in 2014, 179 women have been sued for their activities to defend their rights. They were discriminated against and branded as criminals, and it is common for many of them to be a defendant in more than five cases at the same time.” At an event titled “Side by Side WHRD (Women Human Rights Defenders) 2018” last Wednesday at the Bangkok Art and Culture Centre, Protection International disclosed the latest statistics on lawsuits against female human rights activists.

They showed that most female activists were sued over the forest-encroachment issue and that the Northeastern Region had the highest number of cases against women activists.

A land-rights activist from Chaiyaphum in the northeastern region, Oranuch Phonpinyo, said that poor people of every gender and age were most likely to be victims of unfair government policies, so many women also took on the considerable role of campaigning for their basic rights and justice.

Oranuch said the statistics showed that the land-rights issue was the most prominent problem. Since the NCPO proclaimed its forest reclamation policy and enforced orders to take back forestland from encroachers, poor people across the country had been affected severely – especially in the Northeast.

She gave the example of Suphab Khamlae, wife of missing Chaiyaphum-based land-rights activist Den Khamlae, as the most vivid case of a threatened female activist. Suphab is not only grieving over the loss of her husband, who is believed to be a victim of “enforced disappearance”, she is in prison over a forest encroachment offence that Oranuch described as unjust.

“I do not think the situation will get better soon, as the NCPO is still very powerful and it is nearly impossible to expect that they will care about poor people,” she said.

Angkana Neelapaijit, a member of the National Human Rights Commission, noted that female activists not only have to embrace family duties, but they are also prone to be victims of gender discrimination and assault.

Angkana stressed that the problem for authorities was identifying those among them who violated human rights and discriminated against female activists. She urged the government to prioritise the protection of human rights and prosecute officers who committed violations.