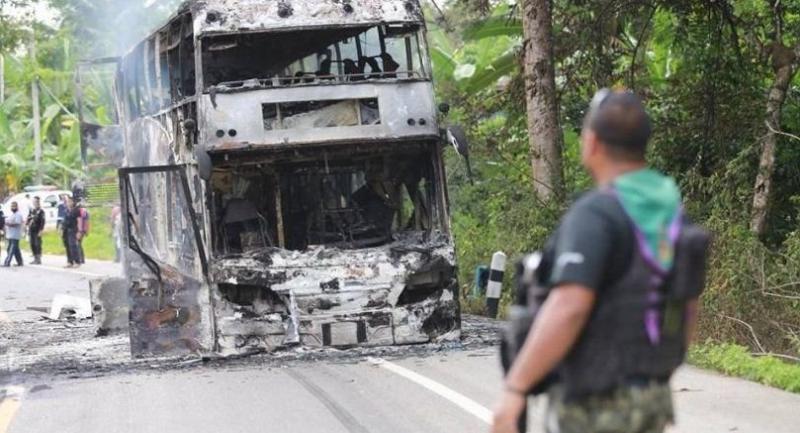 MILITANTS armed with rifles yesterday torched a coach heading to Bangkok after removing the passengers in Yala’s Bannang Sata district in the latest violence in the South.

Prior to the attack, the militants, who authorities said were trying to create chaos, also set up roadblocks with trees that they had cut down and set fire to villagers’ houses.

Officials were alerted to the bus incident at about 2.30pm. When they rushed to scene, they found the double-decker bus belonging to the Siam Dernrod company on fire and firefighters trying to extinguish the blaze.

However, the fire was so severe that it gutted the bus.

Marohdi Ding, a staff member with the coach company who was on the bus, told police that the bus was from Betong district and heading to Bangkok with 13 people on board including himself and the driver.

While the bus was on Road No 410 in Bannang Sata district, the driver was forced to stop after seeing burning tyres on the road.

“After the bus stopped, a group of about 10 armed men emerged from the roadside and demanded that all the passengers, the driver and me get out of the bus, saying they didn’t want to harm us,” Marohdi said.

The men were dressed in camouflage like soldiers, he added, and spoke in the Yawi dialect.

The men poured petrol on the bus before setting it on fire and then fled on foot to the nearby forest.

The militants seemed to have prepared their escape route by using trees to block the road and deploying spikes to prevent authorities from following them.

Officials said the area of the attack was near that of an attack in April 2013 when a bomb exploded near the car of then-deputy Yala governor Isara Thongthawat and provincial district chief Chaowalit Chailerk. The attack killed both officials, who were heading to a festival in Betong district.

Officials said that before yesterday’s torching of the bus, militants staged minor attacks in other areas in the district in part to distract officials, including creating roadblocks with trees and setting fire to houses.

Officials said they believed about 20 militants had been involved in the attack, who then divided into three groups and were assigned to do different tasks.

The first group was responsible for cutting trees and deploying spikes, the second for burning tyres and the third torching the bus, officials said, claiming the attack was the work of a militant group led by militant suspect Ahama Luebesa, who operates in the area.

The objective was to create disturbances in the area, officials said.