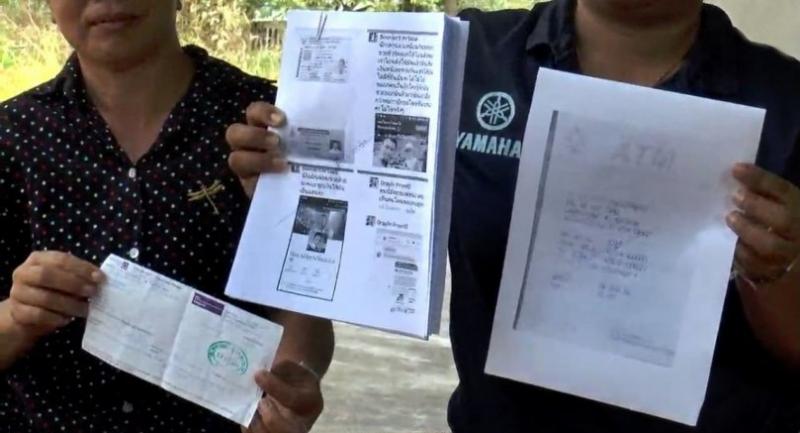 Eight Thai workers claimed they were duped of Bt142,000 last month by a Thai man who used Facebook to advertise agricultural job opportunities in South Korea.

Nakhon Ratchasima employment official Nithi-on Boonyanusit and her team interviewed the alleged victims on Sunday at Tambon Talad Sai in Chum Phuang district and collected evidence about the Facebook page, details of the bank account the victims had wired the money to, and the victims’ chat records with the suspect.

Victim Boonlert Ard-dee, 36, told officials that she found information of the job opportunity in South Korea in December on a Facebook page of a Thai man named Kongpop Pongkamla. She and five relatives applied for passports and sent all information to the man to book their tickets. He charged them Bt17,000 each while her two other friends, who were charged at Bt20,000 each, also joined them. A total of Bt142,000 was wired to the suspect. They became suspicious when the suspect closed his Facebook page just a few days before the group’s departure date on December 15 so they filed a police complaint on December 14. Police began investigations and froze the suspect’s bank account.

Another victim, Kanokporn Chaloychim, 24, said she became interested in the higher-paid job in South Korea as she wanted to build a house for her mother. She pawned her gold necklace for Bt20,000 to fund her travel but it turned out to be a scam. “I am very sad that I lost the money. I will be more careful next time. Now I know I should contact the Department of Employment [DoE]’s provincial office for job opportunities so I can travel and work legally in another country,” she added.

Nithi-on said many Thais were duped in this way by criminals who used social media as a channel to boost their credibility and lured prospects before fleeing with their money. She urged people wishing to work abroad to check all information if the individual or a company, who claimed to be a job agent, were certified by the DoE or to contact the DoE provincial offices to find legal work abroad.