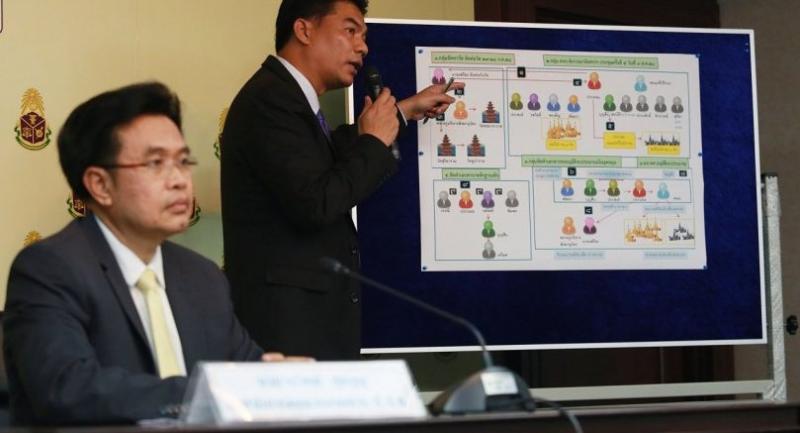 A National Anti-Corruption Commission official yesterday explains using a diagram the roles played by nine officials in the embezzlement of the state’s temple funds.

Among those indicted are Phanom Sornsilp, a former director of the National Buddhism Office (NBO), and Pranom Kongpikul, a former NBO deputy director.

“We will forward our opinions to the attorney-general to start criminal proceedings,” NACC secretary-general Warawit Sukboon said yesterday.

The probe found that in July 2015, Sathien, then the director of Songkhla Buddhism Office, had contacted three temples in the South to offer them state budget support but on condition that most of the money be returned to him.

The budget came from the Buddhism propagation project, for which Phanom was an adviser while Pranom was the chief.

On August 3, 2015, the project’s budget committee approved a budget of Bt4million for each of these three temples.

After transferring money to these temples, Sathien informed the temples that they must each return Bt3.2 million to him.

One of the temples decided to alert the police, which then caught Sathien red-handed with the cash at a shopping outlet in Songkhla province on August 21, 2015. Sathien had arranged for a monk to deliver the cash to him there.

Pranom heard about Sathien’s arrest and immediately instructed Wasawat to prepare documents for a project to boost security for Buddhism in Thailand’s southern border provinces through three activities. Sathien quickly produced these documents as a ruse to make it appear that the money returned to him by the temples were to be used for this new project.

However, the NACC, after poring over the evidence concluded that it was illegitimate for the budget committee to approve a budget for the three temples that had not submitted a request for money. The committee members are Prasong, Wasawat, Pattana, Pornpen, Damrongsak, and Jakvet.

The NACC also believed that documents for the so-called project to boost security for Buddhists in Thailand’s deep South were only prepared to help Sathien.

Because Prasong, Wasawat and Pattana were involved in the preparation of the documents, the NACC has recommended criminal proceedings against them too.

However, Pornpen, Damrongsak and Jakvet have been accused only of committing grave disciplinary offences. This case is just one of the many involving alleged embezzlement of state funds for temples. The damage is believed to have been well over Bt100 million in total. Such corrupt practices had affected not just temples in the South but also many other parts of the country, the NACC said.

Also implicated in the scandal is Nopparat Benjawattananan, another former director of the NBO, who has already fled the country.