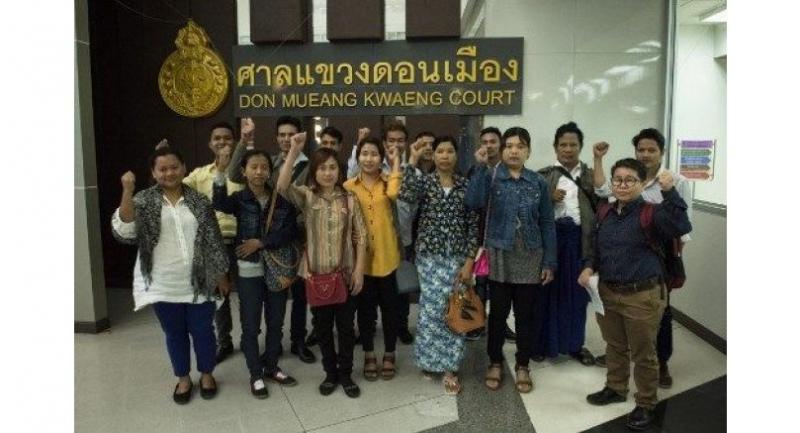 A Bangkok court began a defamation trial Wednesday against 14 Myanmar migrant workers who accused a Thai chicken farm of labour abuses, a case rights groups say is an effort to silence whistleblowers.

The poultry farm in Lopburi province charged the workers with criminal defamation after they filed a complaint to a national rights commission in 2016 alleging they had been overworked and underpaid.

The labourers said they were forced to work gruelling 20 hour days without compensation for overtime among other abuses on the farm owned by Thammakaset, a company that supplied meat to the Thai food conglomerate Betagro.

Betagro, a food giant that sells to clients around the globe, later cut ties with the supplier farm.

But Thammasaket chased the Myanmar workers with charges -- defamation and giving false information to public officials -- that carry up 1.5 years in prison.

On Wednesday the migrant workers arrived at a Bangkok court for the start of the three-day trial.

"The workers just filed a complaint because they thought their rights were violated and asked for an independent body to investigate," defence lawyer Nakhon Chomphuchat told AFP ahead of the hearing.

"This case shouldn't happen," he added.

Thailand has a grim reputation for exploiting the millions of migrant workers who staff the country's fishing fleets, farms and factories but are treated like second-class citizens.

Much of the workforce remains undocumented, leaving them highly vulnerable to unscrupulous employers, police and human traffickers.

Workers from Myanmar, which borders Thailand to the west, make up the majority of foreign labourers.

While trafficked labour and slave-like conditions on Thai fishing trawlers have grabbed headlines around the globe, the kingdom's multi-billion-dollar poultry sector has largely evaded scrutiny.

Thailand does not allow migrant workers to form trade unions and those that complain often find themselves out of work or prosecuted under defamation laws -- a weapon frequently wielded by powerful interests to silence critics.

Ahead of the trial rights groups urged Thammasaket to drop the charges and called for a reform to the kingdom's criminal defamation law.

"These types of cases are all too common in Thailand. They're a mark of the high costs paid by whistleblowers and truthtellers for simply exercising their right," said Amy Smith from Fortify Rights.

Finnwatch, a Finnish civil rights group that has reported on labour issues in Thailand, said the workers were being punished for going public about the abuses they suffered.