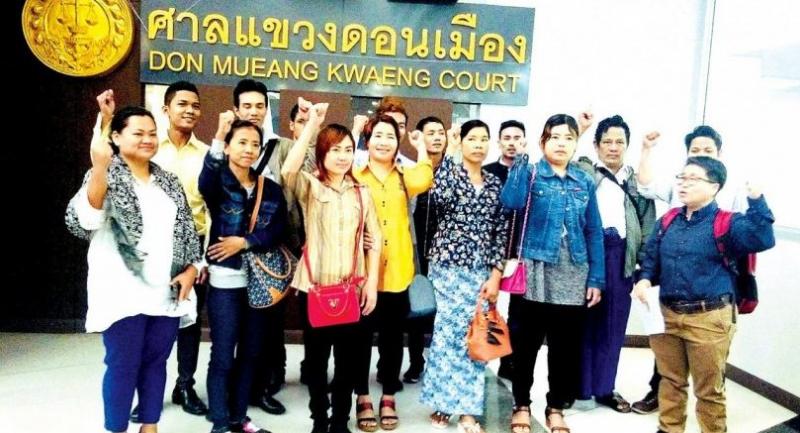 Migrant workers from Myanmar report to the Criminal Court yesterday to fight a defamation lawsuit brought by their |former employer, the Thammakaset chicken farm.

By THE NATION,
AGENCE FRANCE-PRESSE

THE CRIMINAL Court yesterday started a three-day defamation trial against 14 Myanmar migrant workers who have accused a Thai chicken farm of labour abuses.

The employer, Thammakaset, brought the workers to the Criminal Court after they complained to the National Human Rights Commission (NRHC) that the firm had confiscated their ID documents.

“The employer has admitted that they kept the workers’ documents. But it claimed that this action was intended to ensure these documents would not go missing. It was [said not to be] about imposing any travel restrictions,” Sunya Jongdee, a lawyer from the Migrant Workers Rights Network, said yesterday.

He was participating in the defence of the migrants in the courtroom.

Thirteen of the accused attended the court session yesterday, while one woman did not attend because she was about to give birth.

Sunya said Thammakaset had already lost a court battle at the Labour Court, which ordered the firm to pay the 14 migrant workers Bt1.7 million in overdue wages and overtime pay.

In 2016, the workers told the NHRC that they had been forced to work gruelling 20-hour shifts without compensation for overtime and subjected to various abuses at a Thammakaset farm.

Sunya said the Labour Court had agreed to count 7pm-to-10pm and 3am-to-5am as overtime work hours.

Thammakaset had not yet paid the workers and was in the process of appealing to the Supreme Labour Court, Sunya added.

Thammasaket has also pursued the Myanmar workers with charges of defamation and giving false information to public officials, which carries a penalty of up to 18 months in prison.

Several non-governmental organisations have urged Thammasaket to drop the charges and called for reform of the country’s criminal defamation law.

“These types of cases are all too common in Thailand. They’re a mark of the high costs paid by whistleblowers and truth-tellers for simply exercising their right,” said Amy Smith from the NGO Fortify Rights.

Finnwatch, a Finnish civil rights group, said the workers were being punished for going public about the abuses they had suffered.

Speaking to AFP before the hearing, defence lawyer Nakhon Chomphuchat said: “The workers just filed a complaint because they thought their rights were violated and asked for an independent body to investigate.”