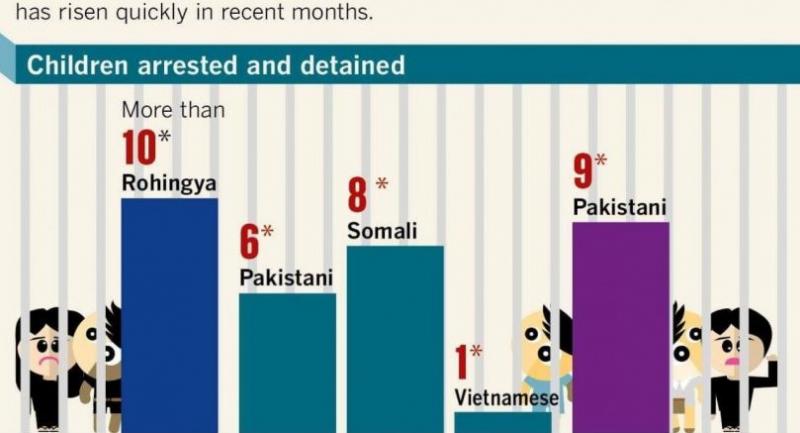 Security agencies, police, the Immigration Bureau, the Foreign Affairs Ministry, and the Social Development and Human Security Ministry have concluded at joint meetings that children fleeing their homelands and entering Thailand illegally should receive proper care and protection, Angkana said.

“We have come to the conclusion that the Social Development and Human Security Ministry should take care of these children,” Angkana said.

She said she believed a memorandum of understanding on the issue would soon be inked. “At this point, it’s just that the ministry does not have adequate staff and facilities to take up this mission,” she said.

Angkana gave an interview after the Coalition for the Rights of Refugees and Stateless Persons (CRSP) urged authorities to consider allowing people seeking asylum, particularly children, to live outside detention centres.

CRSP coordinator Siwawong Sooktawee said it would be better to let asylum seekers live together as families. “Children should be allowed to live with their parents,” he said.

Siwawong said he was worried that boys could be abused while being forced to stay at detention centres with male adults. Siwawong also pointed to an example of a baby in detention who had suffered development problems, which he believed stemmed partly from a life in detention. He said although a detention facility in Songkhla’s Sadao district included a playground, it could not compare with life outside.

“Zainab Bi Bi’s death is a tragedy that should spur Thai authorities to take immediate action to end the indefinite detention of refugees and asylum seekers,” Amy Smith, executive director of Fortify Rights, said in a statement last year.

Siwawong said there were various other measures available to control populations of migrants and refugees, citing as an example the requirement to have them report to authorities on a regular basis.

On January 26, the CRSP officially urged Prime Minister General Prayut Chan-o-cha to urgently introduce measures to end the arrests and detention of child refugees and their families, as well as those seeking asylum.

According to the statement, the Immigration Bureau should be instructed to require migrants to report themselves and produce evidence of their reasons in coming to Thailand.

“Thai authorities should agree to let them use individuals or organisations as guarantors, and exempt the submission of assets as bonds in cases where the migrants are certified by international organisations that they really cannot return to their homeland,” the statement said.

Many migrants have reportedly fled their country out of fear for their lives.

Angkana said the Immigration Bureau generally did not object to bail requests for children but the problem was that the children needed to be taken care of after their release.

“As the Social Development and Human Security Ministry is not ready yet, I have proposed that authorities consider assigning non-government organisations to take up this task,” she said.

Relevant agencies have agreed that asylum seekers should be allowed to live as families and be required to declare themselves to authorities while waiting for refugee status, she said.

“The process to get approved for asylum takes time. If detained for a long time, some people may develop health problems,” Angkana said.

A few foreigners have died while being detained at the immigration detention centre in Bangkok’s Suan Plu area, she said. The centre now holds more than 700 people, including 42 children.