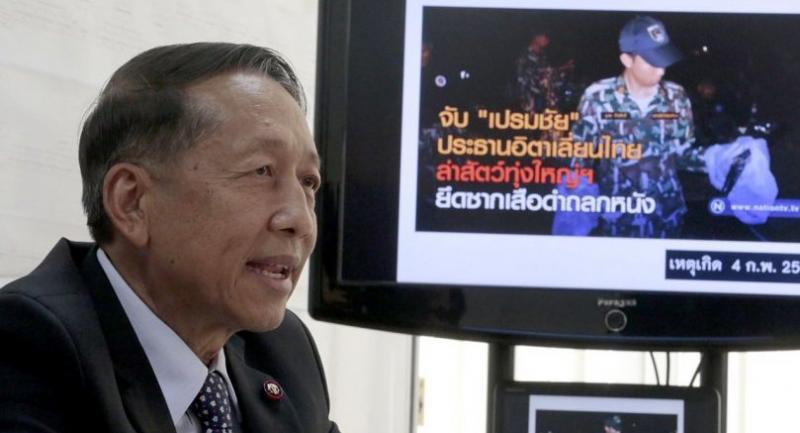 WILDLIFE FORENSIC pioneer Pol General Jarumporn Suramanee, former commissioner of the Office of Police Forensic Science and adviser to the Royal Police, has been invited to advise a panel newly set up by the National Wildlife Preservation and Protection Committee.

The task is to follow up legal proceedings in the high-profile case against the president of Italian-Thai Development company, Premchai Karnasuta, and his party, who are accused of poaching wildlife in the World Heritage site of Thung Yai Naresuan Wildlife Sanctuary.

Jarumporn has seen wildlife forensics used more extensively to help solve criminal mysteries, although he said the field has not progressed as far as he’d like.

WHEN WAS FORENSIC SCIENCE REALLY FIRST APPLIED TO WILDLIFE CRIMES?

Wildlife forensics seriously began around 2011-2012, when two elephants were killed at Kaeng Krachan National Park. Before that, it was to some extent applied to wildlife smuggling cases, because our country is a transit country.

At Kaeng Krachan, two elephants were killed and their tusks were stolen. Our forensic force had never worked on such a case, so I went to the scene and began to investigate using forensic science.

Forensic science at human crime scenes and wildlife forensics are based on the same principles and work approach. When I went there, I started examining the crime scene, which was a crime scene investigation or CSI, what happened, and how.

“I tried to collect all the related evidence to discover who committed the crime. Forensic evidence will help tell how the story happened – the “modus operandi” or method of operation. This then will lead to the motives behind the actions, and to the culprits.

In this case, one elephant had its sexual organ removed, as well as its tusks. From here, we then set out all possible assumptions, including poaching for trade, before deleting the least likely ones so that we could focus on what was most probable.

WHEN WAS WILDLIFE FORENSICS APPLIED TO THE CASE?

From the start ... In the elephant case, we looked at the bullet holes on the front of the skull and conducted ballistic tests. We, along with the vets, unearthed the elephant and x-rayed its carcass for hours before finding AK-47 bullets. So, we reconstructed the scene, and learned from the ballistic tests that the shooter did not shoot the elephant from above, but confronted it and shot it straight on. There were some members of minority groups using AK-47s nearby and the culprits were eventually arrested.

TO RECONSTRUCT THE STORY, ARE THERE CERTAIN ELEMENTS OR EVIDENCE TO LOOK FOR?

Everything. Any items that can be evidence will be collected from the scene.

HOW IS FORENSIC SCIENCE IMPORTANT TO RESOLVE WILDLIFE CRIMES?

You must know that wildlife crimes take place away from sight and there are hardly ever any witnesses. So, wildlife forensics is very significant in resolving these crimes, as evidence obtained at the scene may be the only thing that helps tell the story.

In fact, evidence is more reliable than witnesses. Witnesses can reverse their testimony but evidence cannot [be reversed]. More critically, the victims of wildlife crimes cannot speak, and that is why we need the evidence to speak for them.

HOW DO YOU THINK FORENSICS CAN BE APPLIED TO RESOLVE THE THUNG YAI POACHING CASE?

The concerned authorities have applied the work approach I used at Kaeng Krachan. (Phaya Sua chief Chaiwat Limlikhit-aksorn, who was Kaeng Krachan chief, at that time, is co-supervising the Thung Yai investigation).

We are trying to connect all the evidence, such as a group of the bullet holes on the black leopard, the guns seized at the scene, bullet shells and so on, to find the connection. We investigated from a corpse.

The fingerprints, blood, flesh and tissues were also collected and examined.

ARE YOU CONFIDENT OF RESOLVING THE CASE USING FORENSICS?

I can say that all the pieces of evidence at this point can connect to one another, like a jigsaw being put together. It’s almost completed, but to nail them down, we may need some additional proof. We will use all connected evidence, not any particular piece, to pinpoint the wrongdoers. From what they have, I think they can bring the culprits to justice.

FROM KAENG KRACHAN’S ELEPHANTS TO A BLACK LEOPARD IN THUNG YAI, HOW DO YOU SEE THE PROGRESS IN WILDLIFE FORENSICS?

There has been some progress, but it’s still limited to certain groups of experts, such as the Kaeng Krachan rangers. It’s limited also because the crimes tend to be unreported and therefore unresolved. Public awareness about wildlife crimes, at the same time, is still relatively low, and often there is no investigation into the cases as the crimes are minor. Compared with international community, our work scale is relatively minor.

Wildlife forensics can help resolve human crime cases, and I hope our country invests in this expertise and works more on it. The body of knowledge and expertise in this field needs to be built up and strengthened so that in the future when we need it, we then can apply it promptly.