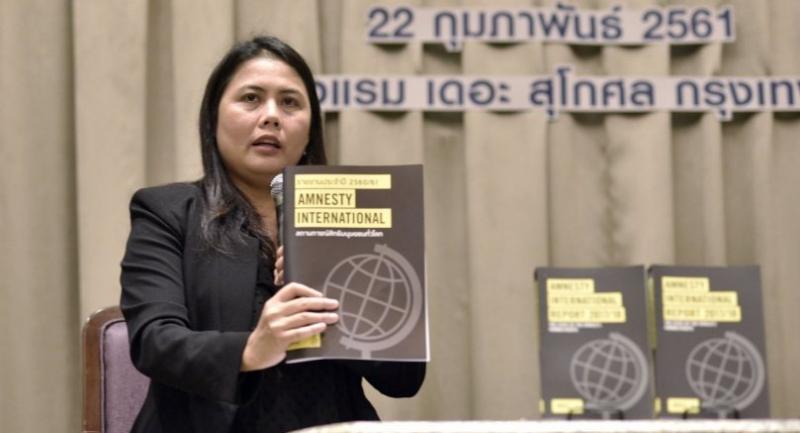 The NGO yesterday unveiled its 2017 report on human rights in Bangkok and revealed that defenders of human rights in Thailand and across the world are facing more intense intimidation and prosecution from the state and business sector.

Amnesty International has reviewed 159 countries around the globe and provided the recommendations for each country to improve their human rights protection.

Salil Shetty, secretary-general of Amnesty International, said that freedom of expression was one of the most serious human rights issues this year, as the governments of many countries were suppressing human rights defenders and over 100 activists were killed last year to silence them.

“In 2018, we cannot take for granted that we will be free to gather together in protest or to criticise our governments. In fact, speaking out is becoming more dangerous,” Shetty said.

The report noted that Turkey, Egypt and China were among the top offenders for imprisoning journalists for criticising the government, and Amnesty International itself also faced problems campaigning for human rights in Turkey and Hungary.

“The situation of human rights violation in Thailand under the administration of the Prime Minister and head of National Council for Peace and Order (NCPO) is still considered very poor, as the junta still exercises the absolute power of Article 44 of the interim Charter to stop any political activists exercising freedom of expression,” Piyanut said.

“Many citizens are still being held in unofficial custody, civilians are still being prosecuted in the military court, and freedom of expression and gatherings in public are limited by the use of NCPO order 3/2558, which bans the gathering of more than five persons for political protest.”

She said the recent prosecution of the group of democratic activists known as “MBK39” showed the government did not respect the rights and freedom of the people and they did not really cherish human rights protection.

She urged the junta to revoke NCPO order 3/2558 and other laws that diminish freedom of speech and expression by citizens and ensure that the violation of the people’s freedoms will not happen again. The demand to allow freedom of expression was one of the NGO’s seven recommendations to the Thai government.

The other suggestions included improving interrogation strategies to solve the southern insurgency, pass a law to prevent torture and enforced disappearances, stop prosecutions against human rights defenders, respect the non-refoulement of refugees, abolish the death sentence, and amend the lese majeste law.

Meanwhile, NCPO spokesperson Colonel Winthai Suvaree said that the NCPO order 3/2558 is a vital tool to keep peace and order in the society and this regulation does not violate the freedom of most people.