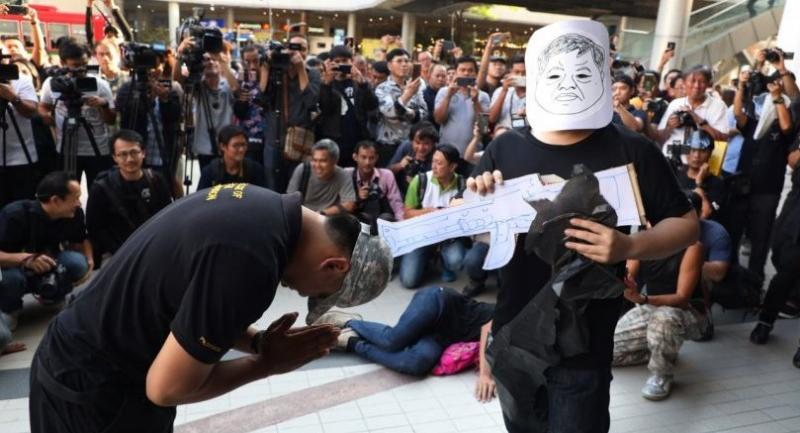 Stencil of black leopard painted over for unknown reasons.

INVESTIGATORS IN the controversial black leopard hunting case are facing serious distrust expressed by members of the public, as the head of the investigation team, Pol General Srivara Ransibrahmanakul, is seen as too close to the suspect, Italian-Thai Development president Premchai Karnasuta.

A picture of Srivara deferentially greeting Premchai, the prime suspect in a poaching case in Thung Yai Naresuan Wildlife Sanctuary, when the latter reported to the police last Friday has elicited serious criticism that the senior police officer might influence the investigation in favour of the business tycoon. Srisuwan Janya, secretary-general of the Association to Protect the Thai Constitution, yesterday said the slow investigation progress and clear picture of Srivara showing unnecessary good manners to Premchai made him believe that eventually Premchai would receive minor punishment or escape justice.

Srisuwan said he would ask the Department of Special Investigation (DSI) to investigate the case.

“This illegal poaching case is of the public interest, but the investigation team, especially Srivara, still showed suspicious behaviour appearing that they are trying to help Premchai in this case and there are many efforts trying to punish the forest rangers and minor police officers,” Srisuwan said.

He added that it was normal for offenders to do everything to preserve their freedom, while suspects who had both influence and wealth, such as Premchai, used those advantages, especially given that his company had secured so many contracts for major government projects and had close relations with top government officials.

“It is very easy for the investigation team to help Premchai, as they can make the docket of his case and the evidence against him appear too weak and eventually the court will be unable to punish him or allow him to receive a minor punishment,” Srisuwan said. “The court could punish Premchai for hunting the black leopard, even if the investigation team fails to provide evidence that he shot and killed the animal, but there are many factors that he could cite asking for reduction of his punishment or to get his sentence suspended.”

He added that it would be very improper for the law enforcement to help Premchai, and if he walked free, the public would lose faith in the Royal Thai Police, the government and, most importantly, the legal and justice system.

Srisuwan added that he would ask the DSI to take the case as special task and assume responsibility from the police.

The arrest of Premchai for alleged poaching has triggered investigations into other wrongdoing connected to his network of businesses and family. Cheewapap Cheewatham, head of Royal Forest Department’s Phayak Prai taskforce, said more land belonging to Premchai’s family business, CPK International, had been found to be illegally situated in Loei’s Phu Rua district. Cheewapap said about 6,500 rai (1,040 hectares) of land at four disputed plots were found to be illegally owned, as the land deeds had been revoked since 1991, but the company still continued to use the land.

“We are going to investigate further to find more illegal forestland encroachment by Premchai’s business network and we want to ensure the public that the wrongdoers in these encroachments will face justice,” he said.

In a related update, street art depicting a black leopard and a “mute” button by the famous graffiti artist known as “Headache Stencil” on a wall in Bangkok’s Soi Sukhumvit 58, which signified the injustice involved in the case, was painted over within 24 hours of its completion by an unknown group of officers, while the other graffiti nearby was left untouched.

Headache Stencil is also famous for his caricatures of Deputy Prime Minister General Prawit Wongsuwan and his controversial luxury watches. He questioned yesterday why the leopard stencil had been painted over, and who had ordered the act.