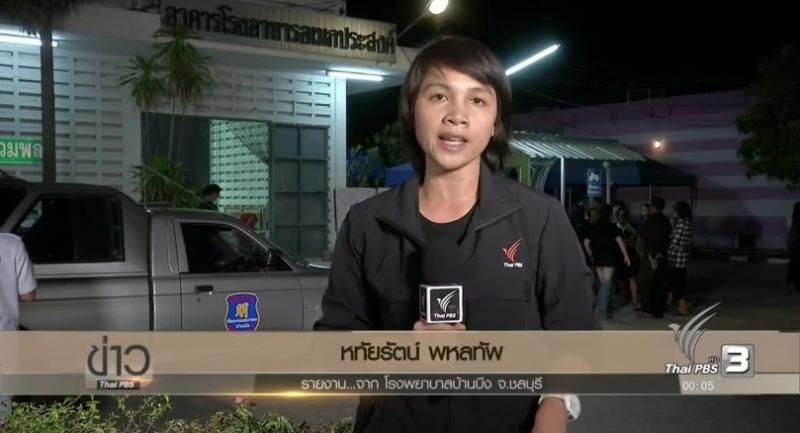 Hathairat Phaholtap is a woman human rights defender working with the media in promoting and defending human rights by presenting the truth to people. She works in a socially responsible way to help create a fair society through news releases and self-monitoring of the media.

Hathairat is a journalist who is dedicated to presenting human rights issues during a time where press freedom in Thailand is restricted and freedom of expression is limited. She serves one of the important functions of the mass media – protecting the rights of the people. She presents the facts and ensures the stories of those who do not receive justice are broadcast.

Hathairat received the Media Prize for Human Rights Promotion for her work as a prominent and respected television journalist – specifically her reporting on the ethnic cleansing and trafficking of Rohingya people, including their situation in the refugee camps on the Bangladesh–Myanmar border. Hattairat travelled to Cox's Bazar in Bangladesh to monitor and report on the more than 600,000 people, mostly women and children, who have fled to safety.

Her report increased the understanding of human rights and the abuses to human dignity that the Rohingya have faced. The report also drew attention to the role of the State in creating situations where people flee to find a better life. In addition, she has tried to raise awareness of the situation among Thai society that Rohingya are our fellow human beings who are suffering. Naturally, some Rohingya have escaped from Myanmar into Thailand. However, they have no legal status; even human-trafficking victims have not yet been protected in accordance with human rights standards.

Among the mainstream media, little attention has been given to the violations of the rights of Muslim inmates under State control. Hathairat has made a short documentary about the situation, titled “The Exit?”. She reported for over six years about violence in the Southern border provinces, drawing attention to how the peace process is discussed by the security forces compared to the views of others in the areas. The documentary also highlights the workings of the justice system and the rights of the people, especially during the arrest and detention processes.

Hathairat also produced a report titled “Child Abuse and Child Rights”, after receiving complaints from a French man that his daughter and five-year-old son were being sexually abused by their stepfather. Following the report, the court ordered the two children to be put in the care of the father until further notice. Hathairat continues to follow up on the issues of parenting and child abuse to ensure children are fully protected in accordance with the Child Protection Act 2003.

In addition, she played an important role in the Journalists’ Association of Thailand when she published statement of the results of a fact-finding report on sexual harassment by media executives. The Subcommittee on Civil Liberties and Media Reform of the Journalists’ Association of Thailand issued a statement that said: “We call on the Press Council of Thailand for full disclosure of the actual report undertaken by the subcommittee on the issue of sexual harassment.” Hathairat called for release of the summary and full report in order to set a standard in Thai society for transparency in investigating and dealing with sexual harassment.

Soon after Hathairat resigned from the Subcommittee on Civil Liberties and Media Reform in order to pursue the facts in an effort to ensure individuals and organisations have access to information and understanding, including developing solutions to combat the problem of human rights violations against women in the media. The freedom and rights of the media along with access to information by the public are important cornerstones of democracy. Empower is an organisation promoting rights and various opportunities for sex workers in Thailand. It is a strong and creative movement that has created an historical precedent when the Committee of the Convention on the Elimination of Discrimination against Women (CEDAW) recommended repealing criminal law, the immediate end to violence and entrapment by authorities, and ensuring that the labour protection law is enforced for all workers in entertainment venues.

For over 30 years, Empower Foundation has worked for the rights of sex workers. Beginning in Patpong, the famous nightlife district of Bangkok, the project began by sex workers learning English, and Empower learning how sex workers understand and perceive the work they do, and the problems they face. Over time, relationships grew in the community and Empower became a learning centre for many people.

In 1986 the news broke that some Thai people had contracted HIV from foreigners. The news and rumours created panic among the people working in Patpong. Alongside the fear, stigma grew quickly. In response, Empower created a street performance called “The Honey Bee Special" to increase understanding and reduce the stigma. They also established a place where people could learn more about HIV/Aids called “Naam Chewit". The centre was later developed and strengthened by people living with HIV.

In 1990, Empower’s language programme was expanded to be recognised as a Non-Formal Education (NFE) centre. Sex workers who graduate from Empower’s NFE centre receive standard educational certificates from the Ministry of Education.

Empower supported sex workers in the creation of Can Do Bar in Chiang Mai, the only working model of just and fair working conditions by a collective of sex workers for sex workers. It includes ensuring full labour rights, occupational, health and safety, and sex workers’ access to the Social Security Scheme.

On December 10, 2006, Human Rights Day Empower received the Human Rights Excellence Award from the National Human Rights Commission. Empower is recognised as a devoted and successful organisation promoting the quality of life and human dignity of sex workers in Thailand.

Working to have society understand the rights of both Thai and migrant workers is not easy. Empower has used many creative innovations that encourage the public to understand their lives more easily. Kumjing – Labour Without Borders is one such project. It is an art project that conveys the life stories, thoughts and dreams of people who migrate from different places to the border of Thailand. It is an artwork created by migrant women. Kumjing is the name of a collection of over 200 papier-mache dolls, half the size of the women who made them.

Kumjing dolls represent young women who have dreamed and migrated to work. Empower travels with Kumjing to many places and big cities. The project was so overwhelmingly well received that in 2009 Empower won the International Freedom to Create Prize, an award for creative artists and social change to bring freedom in countries where work is hard.

After 12 months of community research, in 2012 Empower launched its report “Hit and Run – the Impact of Anti-Trafficking Law and Practices on the Human Rights of Sex Workers”. This is the first research project done by sex workers in Thailand themselves. As part of the reporting, Empower produced a short film “Last Rescue in Siam” that has been shown at over 17 international film festivals and many other forums.

In addition, the migrant sex workers of Empower embroidered a 10-metre tapestry, “The Mida Tapestry”, depicting their experience of “raid and rescue” . The full exhibit was launched at the Bangkok Art and Culture Centre.

Empower’s key struggles stem from the stigma and laws sex workers must live and work with, especially the Prostitution Law. This law leads to rights violations including entrapment and arbitrary detention.

In 2016, Empower requested the National Human Rights Commission to investigate the use of entrapment against sex workers as a human rights issue. In addition NHRC has also investigated the situation of the women apprehended in the well-publicised raid on Nataree Massage and most recently those apprehended in the anti-trafficking raid on Victoria’s: The Secret Forever massage parlour. The NHRC has examined the treatment of both witnesses and victims of entrapment and raids, which impinge their right to just treatment and respect for their human dignity and recognition that sex work is work.

Empower has been a founding member of many networks and has worked with many government agencies in the country, the Asean region and internationally.

Empower is a member of networks on issues of labour, human rights, HIV and health, migrants and others working on issues of sexual diversity and social equality. Empower has a long time working relationship with government agencies such as the Department of Education, The Ministry of Human Security and Social Development, the National AIDS Board and the Women's Council. Empower has consistently made sure sex workers’ voices were included in commenting on policy and legislation on issues as varied as natural disaster assistance, HIV/Aids, prostitution, labour and social security.

Empower was one of the founders of the sex worker network in Asia and the Pacific in 1995 and other regional networks such as APWLD, ICASO APN+, and GAATW.

Since 2013, Empower has been coordinating a project between sex worker organisations of Asean (SW Asean). Empower has a leading role in many other forums such as World Aids Day, International , Regional and National Aids Conferences, International Women’s Day and Stop Violence Against Women’s Day. Empower is part of the emerging Women Human Rights Defender movement. Internationally Empower is part of the global sex worker network NSWP and the Global Women’s Strike.

In 2017, Empower presented a shadow report and advocated to the Committee on the Convention on the Elimination of Discrimination against Women in all forms (CEDAW). In its concluding recommendations the Committee of experts recommended that the Thai government abolish the criminalization of sex workers, immediately end the use of violent force and entrapment by authorities and ensure that labour protection law was enforced for all workers in entertainment venues.

This result does not only work to improve respect for the human rights and dignity of sex workers in Thailand, but also it sets a standard of protection and the end of discrimination against sex workers globally.