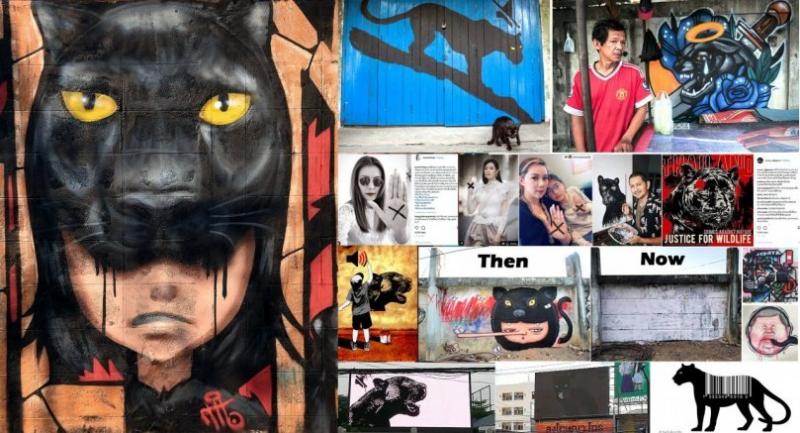 A CAMPAIGN calling for the prosecution of a construction tycoon over his alleged killing of a black leopard and other protected animals has expanded, with people expressing their grief and anger in essays, poems, paintings and, in the latest development, street art.

Premchai Karntasuta, president of Italian-Thai Development Plc, was arrested more than a month ago for poaching in Thung Yai Naresuan Wildlife Sanctuary in Kanchanaburi province.

Members of the public have since expressed shock and outrage after photos released by forest rangers showed that the protected black leopard had been butchered, skinned and cooked.

Forensic evidence showed that the animal had been shot at close range, allegedly using a shotgun seized at Premchai’s campsite.

As people following the case have shown dissatisfaction with the slow pace of the investigation, many have expressed their feelings regarding the case, and the hunting of endangered big cats in general, in many ways. People have also produced T-shirts featuring poems and drawings of black leopards, which are being sold for charity, while others have drawn by hand or used computer technology to produce pictures of the leopard, allowing others to share the powerful imagery on social networks. In Songkhla province, photos of a black leopard being shot have been displayed on a roadside billboard along with other advertisements.

The latest artwork joining the campaign is graffiti, an art form that previously has often been associated with urban blight and lawbreaking teenagers.

However, the public has seemed to welcome street art depicting leopards that has been produced at many public areas in Bangkok.

The first mural apparently was the work of a Facebook user known as “Headache Stencil”, who painted a picture of a black leopard’s head accompanied by a symbol of a mute button on a wall on Sukhumvit Road. The symbolism was described as urging the public not to remain silent regarding the case.

However, the image was quickly painted over by unknown parties, while other graffiti works near it were not touched. The painted-over image was reported to Headache Stencil by someone who went to the site to take a selfie with the work after it was defaced. Many people then wrote comments on Headache Stencil’s Facebook page asking why it had been painted over.

The same fate has now obscured a work by a well-known street artist known as ALEX FACE, which he painted on Phuttamonthon 2 Road in Bangkok.

That artwork depicted the artist’s famous graffiti character Mardi wearing a black-leopard costume and a mask with a Pinocchio nose.

That image was immediately published in traditional and online media, receiving a lot of positive feedback – yet it too was painted over.

The campaign has also been joined by Win Leowarin, a national artist, who used Adobe Illustrator to paint funeral cards for a leopard, which showed the animal along with a fork and blood. Win’s second work featuring a leopard became the talk of the town, with the imagery including a barcode on its body that at first puzzled his audience until he labelled it as “Bar Code Panther”, corresponding to the location of the Kanchanaburi wildlife sanctuary where the animal was killed. Meanwhile, a group of celebrities has boarded the bandwagon by posting photos on Facebook of themselves showing their left hands, which they said signified the heart, with crosses drawn to symbolise their rejection of double standards in Thai law and inequality in society. That represented fears that have widely expressed that Premchai could evade justice in the case because of his status as a billionaire with powerful friends.