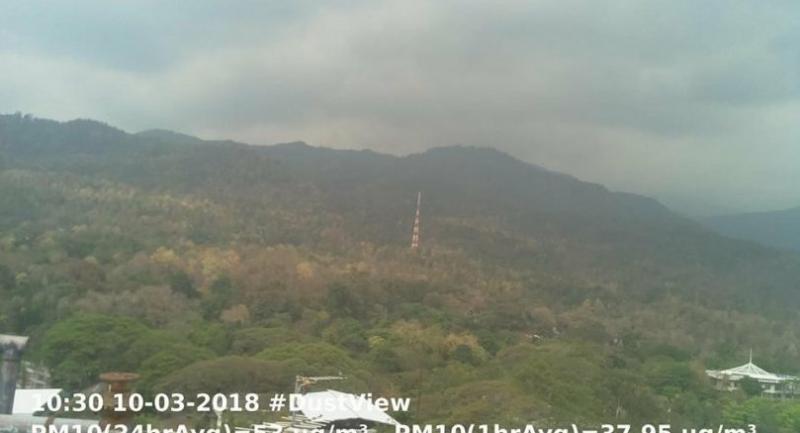 The shortage of PM2.5 monitoring stations blamed for lack of pollution alerts

The authorities have failed to provide accurate and up-to-date air pollution warnings to the people in the midst of the intensifying Northern smog problem, Chiang Mai citizens have complained.

The administrator of the Chiang Mai-based citizen air-pollution warning Facebook page “@thailandgotsmoke”, Kittichai Kaewlom-bueng, said the official air-quality warning system was unable to properly warn the people about air pollution and the dangers to their health.

Kittichai said the Pollution Control Department (PCD) warning system was primarily based on monitoring levels of particulate matter smaller than 10 microns (PM10), rather than the finer PM2.5 standard.

He noted that when PM10 levels were high, the PM2.5 level would also be high. However, due to the different size and nature of the two types of particulate matter, it had been found that on some occasions PM2.5 levels in the air could rise sharply without a significant increase in PM10.

“During January, we noticed that the cold wind from China brought very fine particulate matter to Chiang Mai that resulted in a great increase in the PM2.5 level,” he said. “But if you looked at the official air quality monitoring application from the PCD, which uses PM10 as an indicator, it showed that Chiang Mai’s air quality was still clean.”

This problem is quite noticeable in recent PCD air quality monitoring. Most PCD air-quality parameters in the North have shown the air quality to be at a normal level, indicated by a green colour, even though the PM2.5 level may have been at harmful levels in some areas.

One vivid example is the recent air-quality data from Chiang Mai’s Tambon Sri Phum. From March 3-9, data from this monitoring station showed that the PM10 level was always under the safe level at 120 micrograms. However, the PM2.5 reading from this station was higher than the safe standard of 50 micrograms for six out of seven days. Therefore, despite the PCD announcing that the area was safe from air pollution, it was not.

Kittichai said that many people in Chiang Mai had turned to international air-quality monitoring websites to check the PM2.5 level, instead of using the official Air Quality Index (AQI).

“This is why I and my friends set up the air-quality warning page on Facebook – to provide an alternative source for people to monitor air quality and inform them about the dangers of PM2.5 and how to protect themselves,” he said.

“Many people in Chiang Mai also use Doi Suthep Mountain as a local air-quality indicator. If people in the city can no longer see our sacred mountain, they know that the air pollution that day is high and to avoid going outside.”

Nevertheless, he praised the PCD and other authorities, saying that they had been more active in warning people about air pollution than in previous years. However, he said they should include the PM2.5 level in the official AQI and improve their warning system to reach more people.

“Many people still believe that the information from the authorities is the most reliable source. They should provide accurate and up-to-date information to the people so they can save the country’s budget for curing people [of smog-related diseases],” he added.

PCD air quality and noise management division director Thalearngsak Petchsuwan said that the reason the PCD still did not use PM2.5 as an air-pollution indicator was because not every province in the North has a PM2.5 monitoring station.

“It will cause confusion to the people if some provinces use PM2.5 as an air-quality indicator but some provinces don’t. Moreover, we still use the PM10 level as the main air-quality measurement when cooperating with related agencies and local authorities in dealing with the Northern smog,” Thalearngsak said.

He said the PCD plans to adopt PM2.5 as the new air quality indicator and include it in the national AQI calculation by 2020, when there will be more PM2.5 monitoring stations.