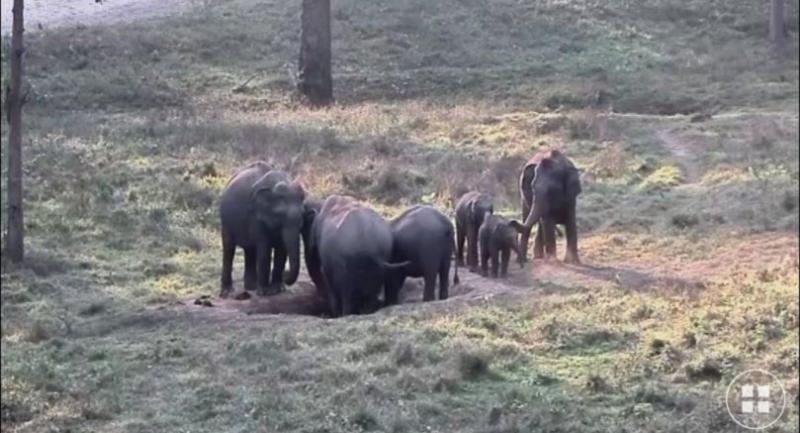 Senior wildlife ranger Prawut Prempree’s face becomes serious when he stares at a map showing how fragmented the forests around Salakpra Wildlife Sanctuary have become due to the rapid expansion of human settlement and development and infrastructure projects.

In the upper part of the sanctuary, there is a ray of hope, a large patch of pristine forest between the fragmented Khuean Srinagarindra National Park and Chaloem Rattanakosin National Park. If it is declared a no-hunting area of Si Sawat, it will help connect those fragmented forests to Salakpra as well as the world heritage site of Huai Kha Kheng, creating one vast home range for wildlife, especially big species such as elephants.

Prawut knows well the area is a needed wildlife corridor. The proposed no-hunting zone is a long hoped for solution to help tackle clashes between elephants and humans, and he has often wondered when it might be realised – and if it would happen in time.

“We often discover too late what went wrong when it comes to human elephant conflict (HEC) here. Our solutions come later than the elephants’,” said Prawut, a former deputy chief of Salakpra, who studied the area and is now a chief of the proposed no hunting area in Si Sawat. Like several other protected forests, Salakpra, the first wildlife sanctuary established in the country, has been facing the challenge of HEC, which has been growing over time due to an increase in the animals’ population and more severe forest encroachment by nearby communities.

Prawut first noticed the problem more than 10 years ago when some elephants were reportedly seen in a community of Tha Sanun, adjacent to the upper part of the sanctuary.

Prawut, then Salakpra’s deputy chief, checked the records and learned that the weather was in line with the El Nino phenomenon. When he went into the jungle to inspect the situation, he found a correlation between El Nino and drying water sources, which had possibly driven the animals out of Salakpra. But what changed the animals’ behaviour and drew them out later on were the crops grown in adjacent areas.

Since then, more and more of Salakpra’s elephants have roamed out of the sanctuary and appeared in residents’ orchards and farms, even in the middle of communities, in search of easy-to-get food. According to Salakpra’s chief, Paitoon Intarabutra, as many as 40 elephants have intruded into residents’ orchards and farms. Last year, at least 38 families were reportedly affected by these intrusions, with damage to their crops worth more than Bt150,000. The animals, on the other hand, faced a sorry state as well as some of them were electrocuted or poisoned.

Paitoon said Mahidol University conducted research using DNA checks to study the elephant population in Salakpra in 2012, and found that nearly 200 of them roamed the forest. Among these were a number of immature animals that would grow up and become fertile, suggesting a growing population even though their habitation area was still the same at around 530,000 rai (84,800 hectares). Paitoon did everything he could to reduce the clashes between animals and humans. Elephant patrol teams were first sent out to ward off the animals. Electrical fences were then introduced from the western part of the sanctuary to the upper area, totalling 56 kilometres. However, the elephants sometimes managed to get across the fences, prompting Paitoon to build a long dyke to enforce the fences.

This helped to some degree, according to farmers like Amporn Petchthong, who once lost corn worth more than Bt40,000 to the elephants. Now, thanks to the fence and a 10kmlong dyke, Amporn no longer has to stay up overnight to watch over her crops. Some residents have also been introduced to alternative ways of living, including raising bees, which frighten off the elephants.

However, these measures are not always successful and the animals often find a way to overcome the obstacles put in their way. For instance, Paitoon discovered that some elephants have learnt how to push over trees to damage the fences so they can cross them.

The proposed wildlife corridor is thus seen as part of a long-term solution to the problem. Prawut specially saw the need for it recently when he encountered a herd of more than 20 elephants roaming out of Salakpra into the proposed no-hunting area in the upper part of the sanctuary. The area was also where at least four tigers from Huai Kha Kheng roamed, according to pictures taken by camera traps installed in the forest.

Some six to eight elephants have also been reported intruding into another forest adjacent to the southeastern part of the sanctuary that Prawut and Paitoon also want to declare as a no-hunting area. This is particularly critical to the animals’ home range as it was once part of the vast, low plain Thung Salakpra field that large animals preferred to tread.

Both patches are now under the supervision of the military, which uses them for exercises. Forest officials of the National Parks, Wildlife and Plant Conservation Department are in initial negotiations with the military to create a no-hunting zone.

The country’s forests, she said, are heavily fragmented following development and the expansion of human settlement. Continuing encroachment has reduced the chances of connecting those fragmented forests together.

“When we kill a wild animal, they are hurt already but when we destroy their habitats, we do not just kill that animal, but its whole family. So, habitat degradation and destruction is truly hurtful, not to mention the many other impacts that follow,” said Kanchana.

She believes forest officials need to work with communities to tackle this conservation problem. At present, she and other wildlife experts have proposed HEC resolution as part of the reform plan for natural resources and the environment. The plan is still under consideration by the junta government and it is expected to be implemented sometime this month. Theerapat Prayurasiddhi, the natural resources and environment reform committee’s vice chair, said the committee viewed that the conflict between human and wildlife, especially elephants, had become more and more critical, so it decided to address the issue in the reform plan.

Under the plan, critical animals would be listed in terms of urgency. Their habitats would be improved, with new food and water sources. Some infrastructure, including electrical fences and dykes, would still be needed in some places to handle immediate and unavoidable confrontations. However, in the long run, the committee wants to see wildlife corridors put in place.

As for Prawut, he has one simple hope: if the zone of around 70,000 rai in Si Sawat cannot be declared a no-hunting area soon, perhaps the military will ban hunting in its exercise area next to Thung Salakpra field to set an example.

His thoughts are with the elephants and other animals. “It was once their home,” he said. “Can you give it back so they can have more chance to survive?”