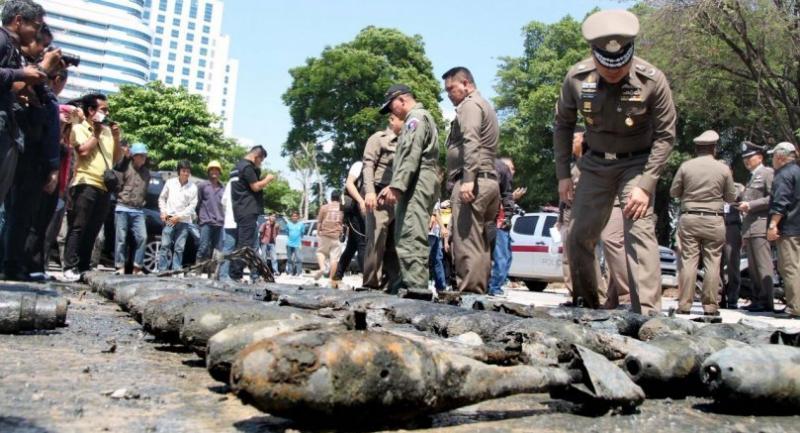 A total of 103 non-explosive BDU-33 dumb – or practice – bombs were found at a construction site near Vajira Hospital in Bangkok on Monday morning. Pol Captain Sutee Nualchan, deputy inspector of the Explosive Ordnance Disposal unit, said a construction worker had come across some of the practice bombs while he was using a bulldozer to dig a hole for foundation work.

The site foreman then alerted the police, who dispatched the bomb disposal team to the scene. The ordnance disposal team discovered that the bombs, which each weigh 25 pounds (11.3 kilograms), were the BDU-33 model, a type that is used to simulate the MK 82 bomb in low-drag configuration.

The BDU-33 is a small cast-iron and steel non-explosive ordnance that is used in training to simulate actual bombs and releases a cloud of smoke on impact.

Construction work at the site, which used to be a football field, is being carried out by Siam Hone.

According to police, 103 BDU-33 bombs were found, all of them about 45 years old and having become inactive due to the passage of time. Srivara said the discovery of the devices had nothing to do with the current political situation. The US-made bombs were made in the US and had lost any lethal power as they had all degraded, the deputy police chief said.

The Explosive Ordnance Disposal team had taken the devices away for later disposal, he added.