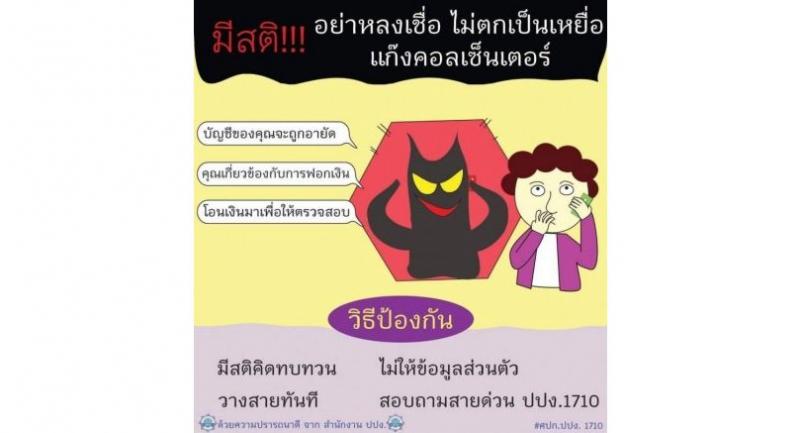 Many elderly people have fallen victim to call-centre scammers who portray themselves as senior police officers, the Anti-Money Laundering Office (AMLO) revealed on Tuesday.

Pol Maj-General Romsit Viriyasan, acting secretary-general for AMLO, said scammers randomly called people at home with claims that they were investigating suspicious activities of the victims and threatened to suspend their bank accounts.

“Most of their victims are elderly people living alone,” he said.

According to Romsit, the scammers have usually lured their prey into withdrawing money from all their bank accounts – and then putting the cash into one new account with an ATM.

The password for the ATM is dictated by the scammers.

“Most victims are unaware that they have been deceived until their money is withdrawn within the next few hours,” Romsit said.

He explained that the scammers were using more complicated procedures lately, transferring money to at least two more accounts before finally withdrawing all the cash via ATMs in Malaysia and Taiwan.

He advised elderly people living alone to hang up if any caller told them he was a senior police officer or a senior official.

“After doing that, alert your grown-up children or local police,” he said.

Romsit also urged bank officials to help watch out for their customers.

“Before opening a new account, [banks should] ask applicants if they have been told by any official to do so,” he said, adding, “By asking a simple question, the victims may have second thoughts and can avoid losing millions of baht.”

Since November 15 last year, AMLO has successfully frozen more than Bt34 million before the money was withdrawn from the bank accounts of 74 victims of the scam.

Over the same period, the agency has also returned Bt6.7 million to 40 other victims via the National Police Office, the acting secretary-general said.