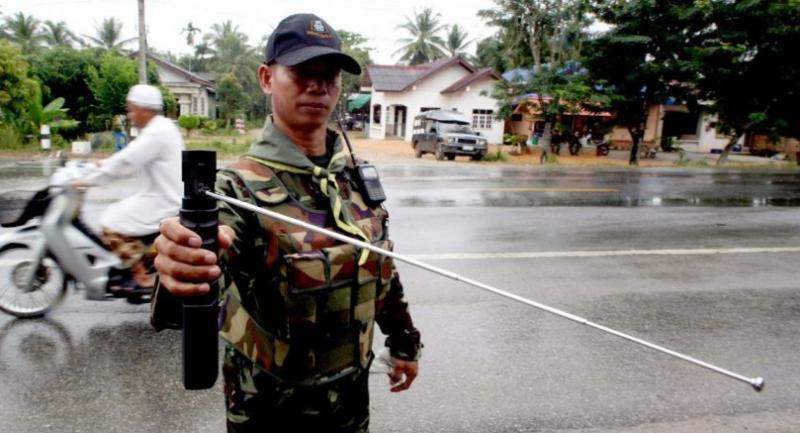 After the procurement, the bomb-detecting devices manufactured by a UK firm failed to detect explosives as advertised.

But the supplier was not held responsible – based on a lack of evidence that the firm’s executives knew the products and information in the catalogues were faulty.

The Security Centre under the Royal Thai Armed Forces filed the case against the company, which has an office in Bang Na district, after the equipment was tested by the National Science and Technology Development Agency (NSTDA) and found to be faulty. The NSTDA reported that the GT200s were composed of two pieces of plastic, and wholly lacking in electronic circuits to receive signals, as advertised in a catalogue distributed to potential customers.

The supposed sensors were made of four pieces of black paper, without any circuitry, the report concluded.

In the catalogue, the device is shown to have a swivel antenna that does not require a battery or other power source, because it is purportedly powered by the human user’s static electricity.

The advertisement also claimed the GT200 detector could detect ammunition, explosives, drugs, gold, ivory, currency and tobacco, even if the items were buried. The Security Centre filed fraud charges against the firm, which is managed by a Taiwanese national, for alleged false advertising concerning the specifications of the devices.

The plaintiff told the court that the Taiwanese executive had demonstrated how to use the devices and distributed catalogues to the military officials before the Security Centre purchased the eight detectors for Bt1.3 million each.

The firm won a bidding process to provide the bomb detectors to the Security Centre by demonstrating the equipment to a six-member procurement committee, the court heard.

However, the ruling dismissed charges on the grounds that the evidence did not show that Jackson Electronics had been aware of the false information in the catalogues, as the company was a middleman for the UK company Compact that provided the equipment and catalogues.

The defendant’s distribution of the catalogues during the demonstration did not prove the executive knew the information was false, the ruling stated.

According to Komsan Srivanich, Jackson Electronics’ lawyer, who was present at the court, a similar trial in the UK against Compact, a UK firm supplying the bomb detectors, was also dismissed on similar grounds.

The court ruled that the plaintiff could file a separate case in civil court.