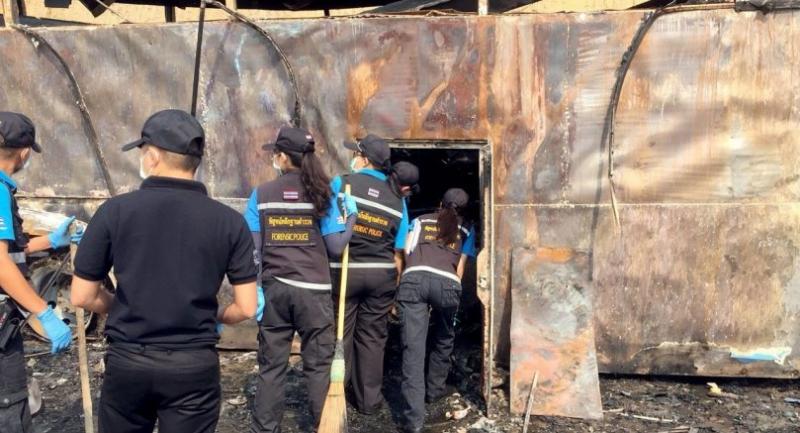 A Thai academic raised questions over the bus’s condition, speed and the likelihood of it being overloaded as possible contributing factors to the tragedy.

Rescuers said the 20 badly burnt bodies were found piled up on one another near the exit doors. With the corpses burnt beyond recognition and documents lost in the blaze, they must be individually identified before being handed over to relatives. They were in the afternoon sent 150 kilometres to two better-equipped hospitals in Phitsanulok – Buddhachinaraj Hospital and Naresuan Hospital – to undergo the disaster victim identification process. Tak Governor Charoenrit Sa-nguansat and Tak police chief Pol Maj-General Parinya Wisitphakul, who inspected the scene together in the morning, said they would coordinate with state agencies to help relatives enter Thailand and retrieve the bodies.

Three other Myanmar workers, who were seriously injured with burns all over their body when they jumped out of the bus, were sent for treatment in Phitsanulok, said Charoenrit. The unnamed Thai bus driver, his assistant and his wife – as well as 24 other Myanmar workers – escaped uninjured. After receiving the fire report at 1am, Mae Tho police and fire-fighters rushed to Highway No 12 to find the entire bus engulfed in fire, which was quickly extinguished. Police said the 47 Myanmar workers had proper documents and were travelling from the border checkpoint in Tak’s Mae Sot district heading to the Navanakorn Industrial Estate in Pathum Thani. Survivors said the fire started in the middle of the bus and spread quickly, trapping those in the back.

The governor said the 47 workers aboard the bus were part of a group of 186 legally registered migrants travelling on four buses to Pathum Thani.

Charoenrit said the cause of the crash and fire was already being investigated. He expressed the personal view that with the road in excellent condition and with no collision involved, the crash might have stemmed from the condition of the bus, human error or recklessness. Charoenrit said he would ask the provincial transport office and related agencies to implement stricter road safety measures in future, especially during the upcoming Songkran Festival.

Meanwhile, Dr Thanapong Jinawong, chief of the Road Safety Policy Foundation, suggested the bus was overloaded with 47 passengers onboard (excluding the Thai driver and two accompanying persons), while a bus of that design was limited to a capacity of 40 people. Thanapong asked whether the extra people were blocking their escape. He also said the authorities must check why the fire spread unusually fast. With the bus chartered to run out of its usual district-to-district route schedule, he questioned whether the Land Transport Office had been informed about this and whether the bus had undergone the required maintenance check-up and safety gear inspection. A district-level bus would not carry a GPS device, so the authority could not control or trace how fast the bus was travelling when the fire broke out, he said.