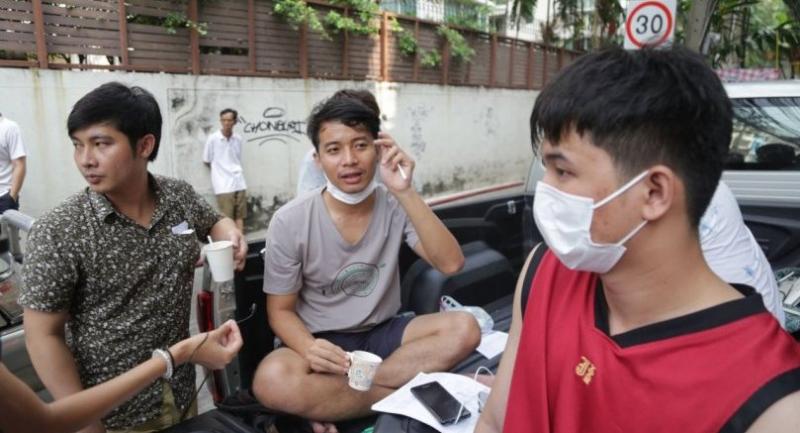 Warut (red shirt) sits with his friend after escaping the fire from his apartment building on Tuesday.

WARUT POONPON, 29, was lucky to have been awake until early yesterday playing the online ROV game. He was alert to the fire that broke out in his apartment building, which claimed three lives, and escaped in time.

He said he and his friend, who also lived in the same building, were playing the online game at about 2am when he heard some sound opposite his room. He opened the door and saw sparks in the electricity control room, so he quickly went downstairs to alert the security guards.

When he went back to his room on the fourth floor, he found thick smoke on the corridors. He alerted his friend via the game about the fire. They then left their rooms and alerted other tenants about the fire before informing police.

Meanwhile, Anhthi Vanngo, 28, a Vietnamese exchange student from Chulalongkorn University, who was reported missing after the fire was put out, has been traced to Ramathibhodi Hospital.

Because she was on a respirator, the nurse wrote the name Anhthi Vanngo and showed it to her. The patient nodded so JS 100 radio contacted the university. Her room was on the 14th floor and one of her friends, who managed to escape, said she was last seen unconscious but she was unable to help her.