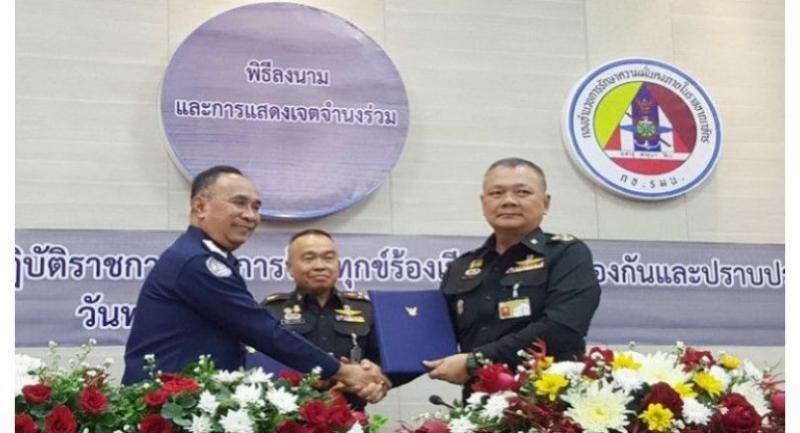 THE INTERNAL Security Operations Command (Isoc) has made its collaboration with an anti-graft agency official, to bolster the country’s fight against corruption.

“We are going to back up what the Office of Public Sector Anti-Corruption Commission (PACC) still lacks,” General Boonchu Kerdchoke, who heads the Isoc Inspector-General Division, said yesterday.

He was speaking as he signed the memorandum of understanding on the collaboration with PACC acting secretary-general Lt Colonel Korntip Daroj.

Korntip said Isoc and PACC already had some forms of collaboration. “But with this MOU, our co-operation will run smoother,” Korntip said. “We also feel safer with the military backing our operations.”

Korntip said the public should not worry that the collaboration would let military officials off the hook. “We will definitely investigate corruption complaints even if they are related to the military,” he said.

He said that more than 500 out of 14,000 corruption complaints that the PACC received had involved military staff.

Regarding two big corruption cases about the Educational Fund for Life Development and the state fund for the destitute, Korntip said the PACC planned to conclude the probe within six months.

Meanwhile, a well-known private school in Kanchanaburi province has allegedly faked birth certificates to claim state subsidies from the government.

Due to the free-education policy, the government provides subsidies to both state and private schools to ensure that parents do not have to pay tuition fees. Students of private schools may be charged more for other fees related to educational services.

The province’s education office has investigated all these 24 schools after finding Amnuayvit Kanchanaburi School, which is famous locally, allegedly used forged birth certificates to illegitimately claim about Bt20,000 from the government.

The Kanchanaburi Education Office has lodged a complaint with police against the school’s licence holder, director and manager.

“I have received the results of a preliminary probe. Now, the probe will go back in years to determine if the school has been involved in irregularities in the past,” he said.

Kanchanaburi Governor Jirakiat Bhumisawasdi said yesterday that relevant authorities had also planned to file a civil lawsuit to get compensation.