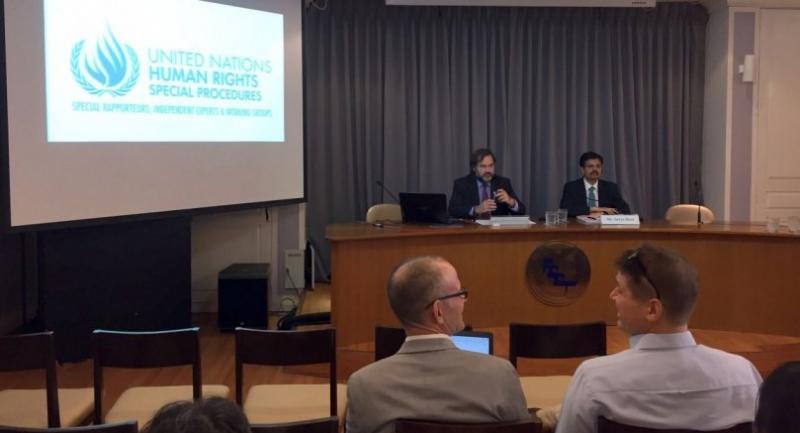 THAI OVERSEAS investments in Cambodia and Myanmar have come under criticism for irresponsible business operations and human rights violation, which has also led to the first-ever class-action lawsuit against a Thai company in its home country.

As the United Nations Working Group on Business and Human Rights concluded its visit to Thailand to inspect human rights protection at business operations, it was revealed that the business operations of Thai sugar giant Mitr Phol and a Thai joint venture Energy Earth PCL have allegedly caused adverse impacts on the environment and the livelihood of locals in Cambodia and Myanmar.

The Extraterritorial Obligation Watch Coalition (ETO Watch) reported that more than 600 families in five villages of Oddar Meanchey province in northern Cambodia were displaced from their land and their houses burnt down, allegedly to facilitate the land concession to Mitr Phol’s subsidiary Angkor Sugar Co Ltd since 2008.

ETO Watch said the people affected by the land grab did not get any compensation or remedial measures from the company, even after the company withdrew from the concession in 2015. This has plunged the locals in poverty, and as they are homeless, and landless.

Meanwhile, the Community Resources Centre Foundation decided to take up the issue of the Cambodian villagers who have suffered due to their alleged rights violation by a Thai company. The Foundation’s coordinator, Sor Rattanamanee Polkla, stated that in order to get proper remedy, ensure human rights protection from transboundary investments, and serve as an example to other companies, the local people decided to sue Mitr Phol for compensation in a Thai Civil Court.

Sor Rattanamanee said this was the first-ever case of people affected by Thai overseas investment seeking justice for the impacts from the irresponsible investment. She hoped that Thai investors would learn a lesson from this lawsuit and follow the UN Guiding Principles on Business and Human Rights.

The lawyer fighting this case, Somchai Ameen, informed that the Thai Civil Court had already accept this case to consider whether to sue as a class-action lawsuit for all people in the five affected communities and the court has scheduled the next court hearing on June 11.

Meanwhile, Mitr Phol defended its operations saying the company had received the land concession legally from the Cambodian government and with assurances from the authorities that all temporary concession areas had been processed transparently.

In another case of alleged human rights violation by a Thai overseas investor, indigenous communities in the Ban Chaung area of Myanmar’s Tanintharyi region released a statement asking the UN Working Group on Business and Human Rights to give more attention to the situation of locals impacted by the human rights and environmental violations at Ban Chaung coal mine. It was highlighted in the statement that after the coal mine began full-scale operations in early 2012, the mining operations and the ensuing waste disposal have polluted the air and water and harmed up to 16,000 people living in 22 villages in the Ban Chaung area.

“The effects on the environment and the people’s health have been severe. Many villagers are experiencing breathing difficulties breathing, skin, eye and nose irritation, body ache, and nausea. Some villagers have even developed tumours. There has also been an increase in the reported rate of miscarriages,” the statement wrote.

Dante Pesce, vice chairperson of the UN Working Group on Business and Human Rights, acknowledged the problems and urged the Thai government to set up more proactive mechanisms to monitor and prevent human rights violations by Thai investors in other countries and allow the affected people to easily access remediation.