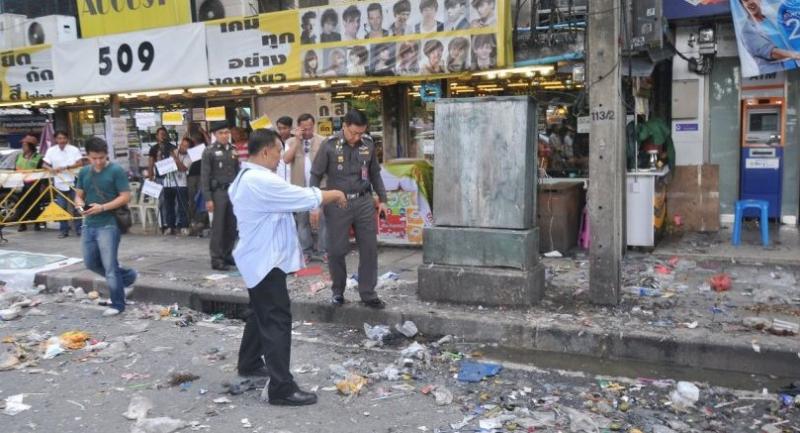 File photo: A bomb attack in front of Ramkhamhaeng University in Bangkok in 2013.

THE SUPREME Court upheld the guilty verdict and lengthy jail terms against four defendants for staging a bloody bomb attack in front of Ramkhamhaeng University in Bangkok in 2013.

The convicts were each sentenced to 33 years and four months in jail, fined Bt60, and ordered to pay compensation to their victims.

The blast injured seven people, in addition to causing damage to property worth about Bt402,000.

Affaham Sa-a, Iqdris Sapator, Kamphi Latae and Ibroheng Vaemae – all residents of Thailand’s deep South – were convicted of planting a bomb inside a garbage bin in front of the university in Bangkok’s Bang Kapi district on May 26, 2013.

Although they fled the scene, police found clues that helped track them. Recordings from CCTV showed a man – identified later as Kamphi – walk to the blast scene with a bag and return without the bag.

During the interrogation process, all four men admitted to the crime.

In 2015, the Court of Appeals had convicted all four defendants of collusion to kill others with prohibited explosives, causing explosions that harmed others and caused damage to property, and attempted pre-meditated murder.

It imposed jail terms of 33 years and four months, a fine, and ordered the defendants to compensate their |victims.