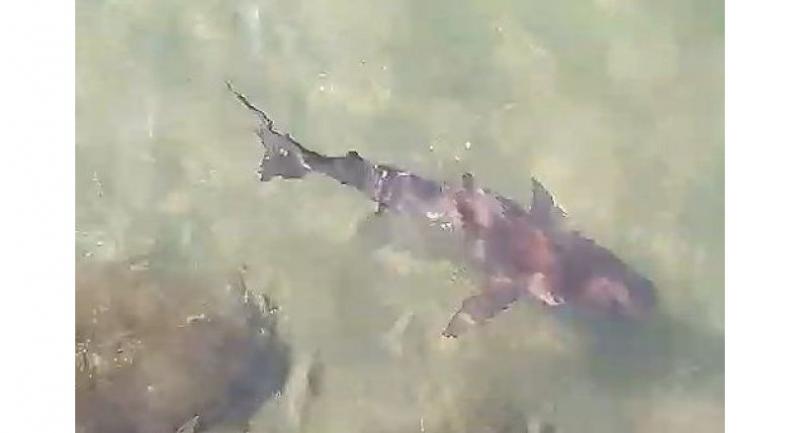 Authorities were on Wednesday keeping a close watch on popular Hua Hin Beach in Prachuap Khiri Khan after it was confirmed that a Norwegian tourist was attacked by a shark there on Sunday.

Officials had initially tried to pass off the man’s severe leg injury as being a gash from sharp rocks, but Jatuporn Buruphat, deputy director general of the Marine and Coastal Resources Department, acknowledged at a press conference at Bangkok Hua Hin Hospital on Wednesday morning that the wound was caused by a shark, most likely a bull shark.

The story changed after the abbot of Wat Tham Khao Tao released video showing four sharks swimming off the beach near his temple. The abbot warned that if no action was taken, someone could be killed. Jatuporn said a marine veterinarian had visited the hospital to inspect the tourist’s injury along with Dr Thassapol Krachangmala, a shark expert from his department.

The hospital’s deputy director, Dr Pongsak Boonleephan, told them the wound was caused by a toothed marine creature. Photos indicated the animal was a shark, most likely a bull shark.

Prachuap Khiri Khan’s deputy governor promptly dispatched officials to watch over the beach and erect signs warning people not to swim out further than 20 metres.

Officials also spoke to the abbot who recorded the video of lurking sharks.

Jatuporn said camera drones operated from an Army base in Hua Hin spotted two sharks, each 1.5 metres long, swimming near the same beach.