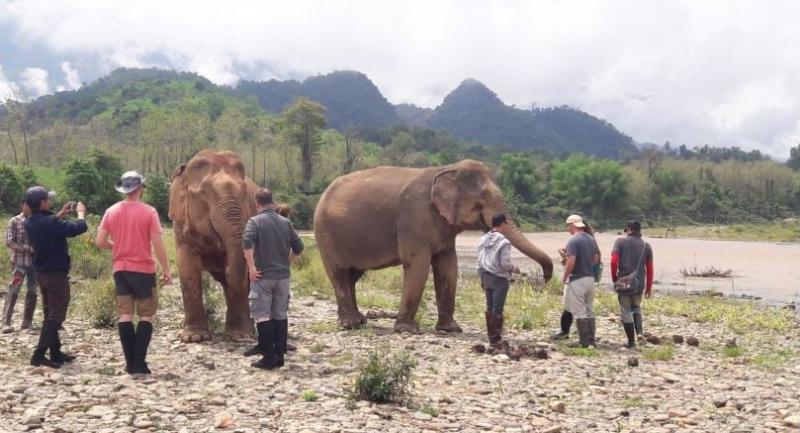 Living in Laos’ only no-riding elephant camp, Chao Kid is a young, naughty and playful pachyderm.

This two-year-old elephant has fun teasing his mother, trying to attract her attention in various ways, such as “crying for help” and pretending to collapse.

“Don’t think an elephant cannot lie. You will notice elephants’ lies if you spend time observing Chao Kid’s behaviour,” Prasop Tipprasert, a wild animal expert and a key staff member at the MandaLao, said as he led a group of Thai reporters on a trip through the elephant sanctuary earlier this month.

“When elephants feel like laughing, they will touch the ground. This is about pressing their head against the ground,” Prasop explained. “I brief tourists about elephant behaviour so that they can understand the nature of these amazing animals. Understanding will inspire love and care.”

Prasop and MandaLao co-founder Michael Vogler usually spend about half an hour at a tranquil restaurant with a breathtaking view, briefing tourists about elephant behaviours. During the briefing, snacks made from local produce are served. There are about 100 families living in MandaLao’s neighbourhood and locals get priority when it comes to MandaLao’s hiring needs.

The simple restaurant sits on the bank of Nam Khan River. Sitting on nearly 1,500 rai (240 hectares) of riverside land, MandaLao is setting an example of ethical elephant tourism. Vogler first came to Laos in 2011. “My background is in wildlife conservation. I find Laos to be an incredibly intriguing place. I came back about four years later with one of my friends and we decided we wanted to move to Laos, so we considered ecotourism, trekking and elephant conservation,” he explained.

“That’s really what separates us from any other camp in Luang Prabang. We focus really on overall welfare. We want the elephants to be healthy, well fed and well looked after,” Vogler said. Its visitors, therefore, can enjoy elephant moments without hurting the wellbeing of the animals.

MandaLao began operating in 2016, recruiting elephants that used to work hard in logging camps. Among them is Bounpheng, a 38-year-old female. “Bounpheng is now happy. She is not forced into labour anymore. No chain. No hard work. Here, my Bounpheng is simply strolling, playing and eating,” Wee, the owner and mahout of Bounpheng, said with happiness glittering in his eyes.

At the age of 75, Wee said he did not expect to earn a lot of pay; he only hoped that his elephant was fine.

So far, MandaLao is home to nine elephants, with at least Bt15,000 per month spent on food for each pachyderm.

Some of these jumbo animals will greet visitors as soon as they cross the river to MandaLao, which is about a half-hour drive from Luang Prabang. After a while, visitors take a boat across the river, taking along some sugarcane, sweetcorn or bananas to feed the elephants on the other side.

If it’s early enough, you will see female elephants and a very young male. Each of them has a name, given by their first owner. You can then touch two of the elephants and feed them the corn and cane. But after a few minutes, many visitors want to get closer and closer. It is a safe feeling because the animals are really friendly and have been taught how to communicate with people.

If elephants feel like walking into the river to get wet and cool down, visitors are welcome to join them in bathing.

After that, visitors can walk alongside the elephants to MandaLao.

When the elephants are ready, you can hike with them into the forest, passing the villagers’ corn and eggplant plantations. These crops are grown especially for the elephants. When you enter the forest, the elephants will walk through a small river and you can walk along the riverbank. Here you’ll feel very much in touch with nature. You’ll observe the elephants walking through the forest with nothing on their backs, showing that they really are wild and independent creatures.

“Our elephants are not chained. Our mahouts do not use hooks,” Prasop said, “Elephants are smart creatures. They can think and carry out various activities on their own.”

Vogler, who has a background in wildlife conservation, said his goal was to ensure the elephants were healthy, well fed and well looked after.

He admitted that he initially did not know much about elephants but he and the other co-founders had a firm determination take care of these creatures in the right way. “That determination gives birth to MandaLao and separates us from others,” he said. Lately, Vogler has discovered that his goals are similar to those of the World Animal Protection (WAP) group, which has waged a “Wildlife, Not Entertainers” campaign to help draw attention to elephants. So, a form of partnership has started.

WAP has recognised MandaLao as a role model in the improvement and development of elephants’ living quality. “We give advice and support the development of MandaLao to ensure that the captive elephants are able to lead their lives as close to nature as possible,” said Somsak Soonthornna-waphat, the head of the campaign.  To prevent elephants from troubling nearby communities, WAP has financially supported MandaLao in constructing an electric fence.

The fence will release electricity at night to prevent pachyderms from straying. The amount of voltage used is safe for the creatures that MandaLao cherishes.