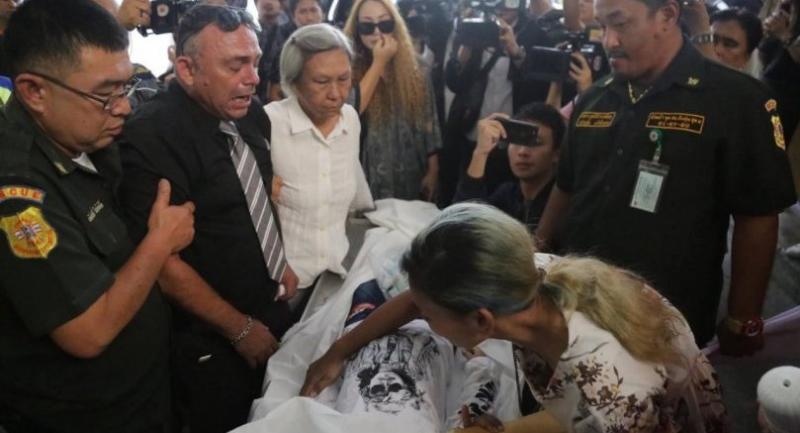 A grief-stricken mother on Friday picked up the body of her son from the morgue at Police General Hospital after he was killed – and his three siblings seriously injured – early on Tuesday morning when a section of the balcony of their rented apartment in Bangkok collapsed.

Rattikan Prakaikaew, 36, said she brought along toys and a set of clothing that the deceased Khanatcha “Alex” Borell, 5, loved when she went to pick up the body.

The children’s Swiss father, Marshall Leon Borell, was also visibly sobbing in grief as he too came to the morgue. This was reportedly also his first time seeing the boy’s face in nearly four years.

Rattikan said a five-night funeral prayer will be held for the boy at Wat Chanthawongsaram (Wat Klang) in Soi Lat Phrao 132 in Bang Kapi district. His cremation rite will be held May 9.

Rattikan said Khanatcha’s three injured siblings were recovering and would soon be released from hospital for further recovery at home.

“I didn't tell them about Alex's death yet,” she said through tears. “I just told them to focus on their recovery and said their youngest brother was asleep.”

A source at Ramkhamhaeng Hospital said Luca Borell, 10, was stable and would be out of the Intensive Care Unit soon, while Chanida Borell, 7, was still under close medical surveillance at the same unit. Another sibling, Pamela Borell, 11, who sustained a broken leg and a brain concussion, was recovering and was able to talk.

“Thank you everyone for caring for the family and donating money to help out,” the mother said, adding that the donated money would be saved for further treatment for her three remaining children. Some of it would also be used as seed money for a business, as she no longer wanted to work away and leave the children at home. She said the family would move from the current fourth floor room to a bigger one on the ground floor.

The four Thai-Swiss siblings fell from the fourth-floor balcony onto the ground outside the five-storey apartment building on Soi Ramkhamhaeng 34 at 1am on Tuesday.

Khanatcha died from a head injury at Ram Khamhaeng Hospital, while Luca, Chanida and Pamela were wounded.

Police found that fastenings had come loose from the balcony extension of the apartment where the children lived with their grandparents and Rattinkan. When the children were sitting or standing on the balcony, or near it, it gave way and they plummeted to the ground below, said police.