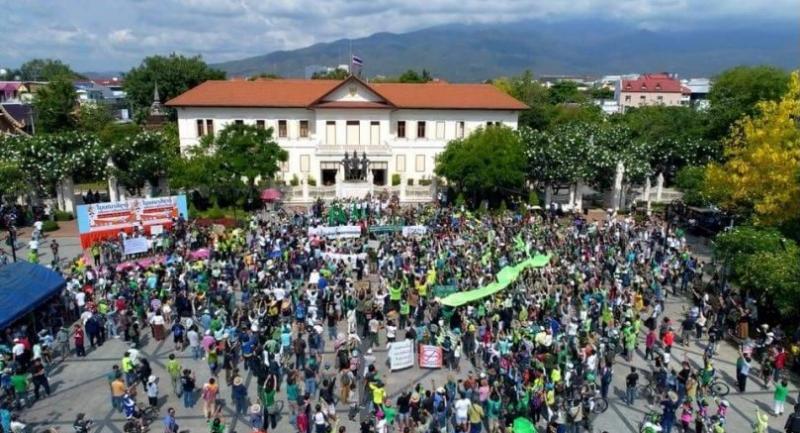 BUNNAROTH Buaklee is not bothered about scrolling through Facebook posts and trying to explain his group’s moves in the latest controversy over the court housing project on the foothills of the Doi Suthep Mountain in Chiang Mai province.

As a spokesperson for the new Doi Suthep Forest Reclamation Network, the long-time columnist-turned-activist now spends most of his time monitoring posts and replying in an attempt to communicate information and correct misunderstanding that has arisen about his group.

Bit by bit, Bunnaroth hopes this will not only help forge understanding among people, but also demonstrate that opposition to the government’s projects does not have to be violent, in contrast to previous events.

Since the group got serious in leading the opposition to the project several months ago, it has adopted an approach based on so-called “soft-power” in its actions.

New media, including Facebook, are used to convey factual information. But the core message goes beyond the facts to the underlying belief in the spiritual value of the place along with respecting community rights based on customary laws. Those core messages are wired into the peaceful campaigns that have attracted numerous supporters and eventually led to the negotiation table last Sunday, and in the process set a new non-violent example for social movements.

“It’s the fight to protect our community rights guaranteed in the Constitution, but more than that are the customary rights that are facing competition from modern laws,” said Bunnaroth. “With that principle intact, we don’t even have to speak out. We express it through our cultural and peaceful campaigns, the thing I call a Lamun fight [polite and gentle].”

The housing project on Doi Suthep would not have come under the spotlight had the Courts of Justice not gone ahead with the construction of a number of residences for court officials and an office for the Court of Appeals Region 5 at the foot of the mountain.

Despite claims that the land plot of around 147 rai (23.5 hectares) in total had been acquired legally, local residents have cried foul over this Bt1-billion project, rejecting it as encroaching upon the pristine forest and natural waterways of the mountain.

The mountain is regarded as a spiritual place by the local people in Chiang Mai and in the North, as it is one of the seven “Chai Mongkol” – an auspicious element for victory – from the time King Meng Rai built the city over 700 years ago. That same regard has been enlisted as a key element, along with the ancient city of Chiang Mai itself, in seeking designation as a Unesco World Heritage Site.

For local residents like Bunnaroth, that is more than enough to fight for. How the fight began

The court housing project was first conceived nearly 20 years ago when the court sought a plot of land at the foot of the mountain to build an office and residences for the Court of Appeals Region 5, but it was only a few months ago that the local residents decided to stand up against the project.

According to Bunnaroth, the issue had been simmering locally since the project began a few years back. During those years, Chiang Mai residents were shocked when they saw the forest at the foot of the mountain being slowly eaten up by the project.

Some started to post on their Facebook accounts, while others posted to online public forums, raising questions about whether the project was eating up Doi Suthep.

The mainstream media quickly grasped the issue, but the court – almost at the same time – doused the rumour with its affirmation that the plot of land was legally held, as it was under the Treasury Department.

However, as the country was under a coup after 2014, freedom of expression was extensively suppressed, as a result few people dared to challenge the government.

It was not until two months ago that the locals felt they had to raise their voices when a patch of forest was cleared to make way for a group of buildings, which stood out in front of their eyes and hurt their feelings.

Numerous online questions were directed to those concerned. The issue received a lot of publicity, bringing several scholars and social thinkers, including Bunnaroth, together for discussions.

The Doi Suthep Forest Reclamation Network was set up as a result, with a collaboration of tens of local networks addressing environmental conservation and cultural preservation. As it was led by a number of noble monks and scholars, including Chatchawan Thongdeelert, a founder of the Lanna Wisdom School, it adopted a mature approach to fight the project, based on soft power coming from a deep knowledge of local culture and customary laws, said Bunnaroth. During the first days, the group issued statements voicing concerns. They also organised a forest-ordaining campaign in the construction area as well as peaceful marches to Bangkok.

They also opened a dialogue with government representatives and regional military leaders to try to find resolution at a local level. The network first called for partial demolition of the buildings likely posing negative impacts to the environment, particularly natural waterways found to have been compromised during the construction.

Through those discussions, the group softened their stance so as to not pose any threats to the opposing side. They decided against demanding the invocation of Article 44, the absolute power given to a head of the National Council for Peace and Order Prayut Chan-o-cha. Seeking that kind of a solution would have led to a clash of power between the administrative and judicial branches of government.

That decision demonstrated to the government that the group had no hidden political agenda, but only wished to see Doi Suthep protected, said Bunnaroth.

As a result, the court eventually decided to leave it up to the government to help resolve the issue, preventing it from being tarnished by the controversy. On April 24, the group held one of the largest rallies under the same military government that has banned any gathering of more than five people after learning that PM Prayut was hesitant about demolishing the buildings.

The rally, however, proceeded in a peaceful way around Chiang Mai city, with the purpose of raising local awareness about the project. Cultural expressions were demonstrated and green ribbons hung all over the city as a symbol of support for the group’s moves and in a protest against the project.

On May 6, the government decided to hold talks with the residents in Chiang Mai. It was represented by the PM’s Office Minister Suwapan Tanyu-wattana.

They managed to reach an agreement on three aspects. First, the court made itself clear that it would let the government handle the issue.

Second, there would be a land demarcation to determine which part of the plot of land should be included as protected forest, and any buildings in there, around 45 or so, would be left and denoted as “no man’s land”, meaning they would no longer be allocated to any government agencies to occupy or use.

The outcome helped avoid legal complications concerning the demolition demand, he said, although it would take some time to yield a fruitful result. The obstacle was that state properties could not be immediately demolished because that would be against the law.

The first round of fighting has now ended and the group has at least received what Bunnaroth calls the road map to restore Doi Suthep.

“There is nothing to be ashamed about in fighting, while you at the same time ‘wai’ [pay respect] them. By ‘wai-ing’ while fighting, we then realised that they also had stepped back and down from the stage,” said Bunnaroth.

However, Bunnaroth said, this was just the first round of fighting by the people. Time would be needed to make things clear about what would come next, he said.

For the time being, the group hopes that their fight can set a new standard for social movements in Thai society, that there was no need to incorporate any violence and that goals could be achieved through peaceful means.

In the long run, the group wishes for recognition of customary rights over natural resources such as rivers and mountains via registration of legal entities over these resources. New Zealand has set a template for that with its river, Whanganui.

Hopefully, Doi Suthep would receive recognition as a legal entity with rights equivalent to those of a person, and so would be better protected.

As for the state, Bunnaroth said there were a lot of lessons learned. Social movements in modern times, he said, were undergoing change. They may not all be politically driven or violently oriented and as the society is learning this lesson, so should the government and its officials, he said.

“New politics from now on should begin with people’s rights, rather than politicians’ power to wield over anything they wish to. There should be space for people to fight for their rights, community rights, and so on. And public participation must truly be encouraged in our society, not being just a vague term toyed with over, and over, any longer,” he concluded.