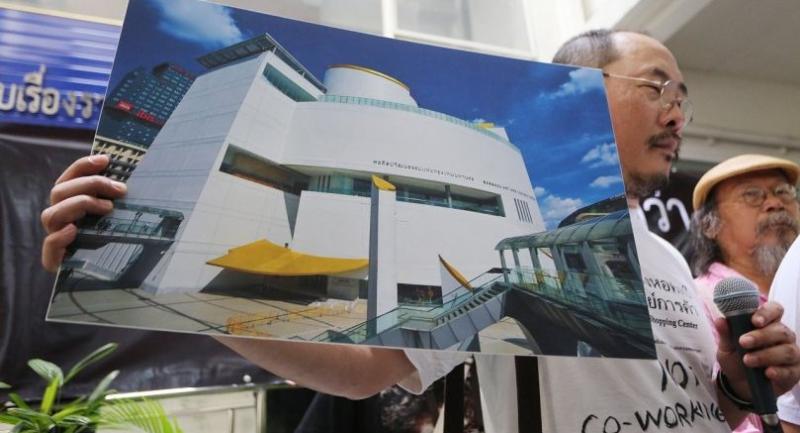 Bangkok Governor Aswin Kwanmuang yesterday stepped back on the controversial plan to take over the Bangkok Art and Culture Centre (BACC), while the Artists Network is calling for the non-profit BACC Foundation to run for the centre for the next 30 years.

Aswin made his commitment yesterday at a press conference following mounting pressure from the Artists Network for free BACC, that lobbied Prime Minister General Prayut Chan-o-cha over the future of the arts centre.

The group delivered a letter to the PM’s office at Government House.

“If many people do not agree with the BMA’s plan to take over the BACC, we will leave it,” said Aswin, who added that the decision was suggested by Prayut.

The letter requested that the BACC Foundation continues to run the arts centre and that funding the centre be made BMA policy.

Supported by more than 500 artists and other civil networks, the letter also mentioned the BMA’s 2005 declaration – signed by former Bangkok governor Apirak Kosayodhin – that it would support the BACC Foundation until 2021.

In addition, more than 16,000 people signed an online petition, www.change.org, supporting a campaign under the hashtag #freebacc which the network posted on Saturday.

Aswin said: “The BMA will allow the BACC Foundation to manage the arts centre until the contract is finished in 2021. Then we will discuss the management [and whether] the BMA will take over or not.”

After funding the centre since it opened 10 years ago, the BMA cut its funding this year.

“In late 2017, the city council … decided that this year, 2018, they would not support this budget. Later on, they transferred Bt40 million to the Office of Culture, Sport and Tourism which oversees our operation. However, this year, we haven’t been able to ask for any financial support from this office,” BACC director Pawit Mahasarinand said.

The BACC Foundation has been concerned about the budget for the last three years. Aswin said he did not know much of the details about the agreement between the BMA and the foundation but assured that he would solve the problem.

“I’ll assign the Office of Culture, Sport and Tourism to talk to the foundation about the funding support and any legal issues,” he added.

Although the Artists Network was concerned whether the commitment would be followed through, its members agreed to discuss the situation to find long-term solutions on the management.

The group also had three other requests, Chumpol said.

“The group asks the BMA to extend the BACC Foundation contract on the management the arts centre for the next 30 years,” he said.

“To maintain a sustainable management, the BMA must solve the legal difficulties on budget funding for the foundation. Finally, the governor and the Artists Network need to select the BACC board and committees together.”

The centre also planned to hold its 10th anniversary with a #freebacc campaign and hold discussion on how to sustain the arts centre.