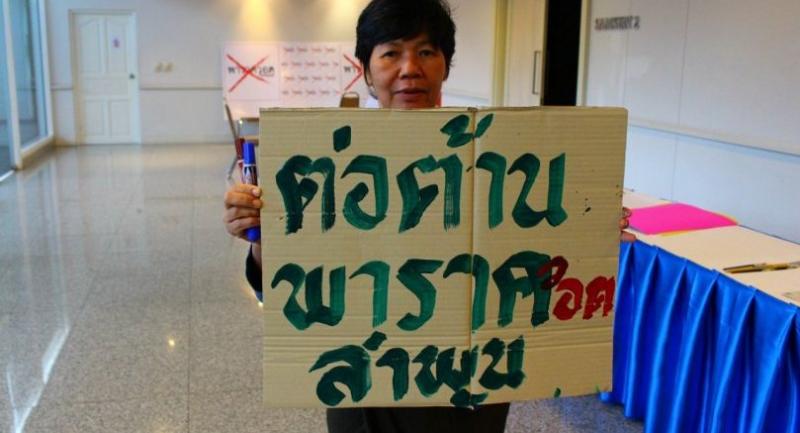 A farmer from Lamphun protests yesterday with a sign reading “Lamphun opposes paraquat” at a demonstration to oppose use of three farm chemicals. Photo Pratch Rujivanarom

Hazardous substances committee to rule on future of paraquat today

THE GOVERNMENT will have to take responsibility for the damage to people’s health and the environment and could face lawsuits if it allows the renewal of licences for paraquat and two other agro-chemicals, activists caution.

The Hazardous Substance Committee will today make a decision on the future of paraquat, glyphosate and chlorpyrifos.

A group of agriculture and consumer protection activists gathered at the Industrial Works Department yesterday to submit a petition to the head of the Hazardous Substance Committee, calling for a total ban on these chemicals. The groups cited scientific facts that corroborated the adverse impacts of these commonly used herbicides – paraquat and glyphosate – and pesticide chlorpyrifos to public health and the environment.

Despite its efforts, the group said it was very likely that further use of these chemicals would be allowed.

BioThai Foundation director Witoon Lianjamroon warned the committee of consequences if it failed to act, adding the government would have to take the blame and responsibility.

“Unless these harmful chemicals are banned, Prime Minister General Prayut Chan-o-cha and his administration would have to be held responsible for people’s sickness and environmental contamination,” Witoon said.

“Any move to renew the licences for these chemicals would show that the government cared more for the interests of transnational conglomerates instead of the well-being of its citizens,” he said.

The secretary-general of the Environmental Litigation and Advocacy for Wants Foundation, Surachai Throngngam, appealed to committee members to exercise their obligation to carefully and transparently decide on such an important policy, based on the Constitution and the laws of the country, or they may face lawsuits.

“The members of the Hazardous Substance Committee are considered to be administrative officials, so it is their duty to follow the Constitution and laws, even though they can have their own point of view on this issue,” Surachai said. “Nevertheless, they have to make sure that their decision is reasonable, not in conflict with legislation, and for the greater good of the public,” he said.

He added that the committee members must remember the current Constitution guarantees citizens the right to live in a clean and healthy environment and Hazardous Substance Committee regulations also forbid members who may have an interest on the issue from casting a vote.

the Industry Ministry in the Administrative Court.

However, the coordinator for a Ratchaburi farmer network, Anchulee Luck-Amnuaiporn, expressed her full support for continuing the use of paraquat, glyphosate and chlorpyrifos, as she said these chemicals were needed by farmers. She said the chemicals were effective in controlling weeds and pests, which helped reduce production costs for farmers.

“The reports about paraquat contaminating the environment and our crops are baseless and just slander from the so-called consumer protection activists. If these chemicals are banned, the cost of production would increase by 55 times and leave poor farmers in financial disaster,” Anchulee explained.

However, another farmer from Khao Chaison district in Phatthalung province, Prapai Kongto, revealed that her family and many members of her farming community had stopped using the chemicals more than 10 years ago. She said their experience was completely at odds with Anchulee’s claims. Prapai said organic farming produced a higher income than traditional chemical farming.

Prapai said that after a majority of her community switched to organic farming, she also noticed many people, including herself, were healthier.

Farmers had previously suffered frequent rashes, while one of her relatives who worked with paraquat had died of lung cancer.

“My alternative method to fight weeds in my farm is to uproot them by hand. This method may be hard work and time-consuming, but it is good exercise and keeps me healthy. I would like to urge other farmers to stop using paraquat and ask the authorities to ban these toxic substances for good,” she added.