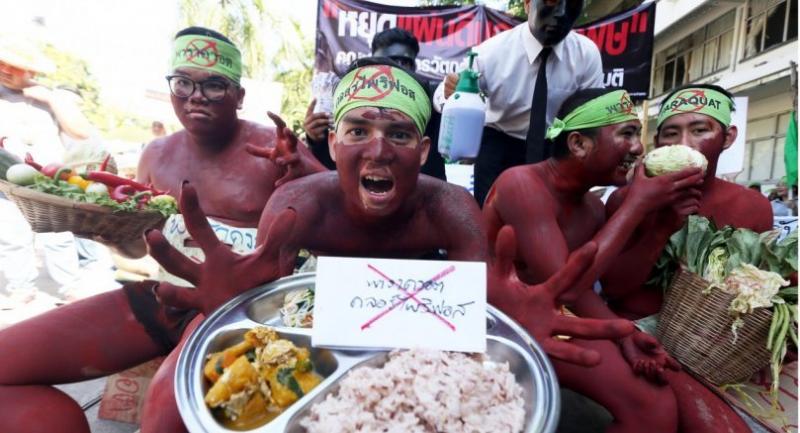 Activists sport red body paint to signify the toxicity of farm chemicals yesterday during a rally at Government House following a decision to permit the use of paraquat and two other hazardous agri-chemicals, glyphosate and chlorpyrifos.

PROTESTERS YESTERDAY welcomed an assurance by the government that it would reconsider banning farm chemicals paraquat, glyphosate and chlorpyrifos.

Agriculture and Cooperatives Minister Kritsada Boonyarat told protesters from more than 700 organisations, who had gathered yesterday in front of Government House, that the ministry will reconsider a previous decision to allow the use of the chemicals in Thailand by assessing new scientific data on their impact on health and the environment.

Protesters from across the country marched to Government House yesterday, which was World Environment Day, to object to the decision by the Hazardous Substance Committee not to ban paraquat, glyphosate and chlorpyrifos. They demanded to meet with the Prime Minister General Prayut Chan-o-cha to submit a petition with more than 50,000 signatures asking the government to reconsider the committee’s decision and ban the chemicals.

Kritsada, who met with the protesters and accepted the petition, said the well-being of the public and the protection of people’s health and the environment was the government’s first priority.

He said the ministry would work with academics and the public sector to gather new evidence on the impact of the chemicals and urge the committee to reconsider its decision.

The government also agreed to help find alternatives for these chemicals and support organic farming and other chemical-free methods to control pests and weeds on farms, he said.

“Right now the government is gradually reducing the import and use of these chemicals in Thailand and we promise to investigate the alleged conflict of interest among the members of the Hazardous Substance Committee. All citizens can be assured of the government’s effort to ensure the public is safe from harmful chemicals,” he said. Prokchon Usap, coordinator of Thailand Pesticide Alert Network, said that the protesters were delighted by the minister’s assurance. She said they would monitor the government’s measures closely and the promise to review the harmful chemicals.

But Prokchon said the group was concerned about the ministry leading those efforts, saying it does not have expertise on health issues and in fact has an obligation to promote the use of agro-chemicals.

The Network for Supporting Hazardous Substances Ban later expressed its support for reconsidering a ban on the toxic chemicals, but the network emphasised that those involved must have no conflict of interest and agree that public health is the first priority.

The Hazardous Substance Committee discussed the use of paraquat, glyphosate and chlorpyrifos on May 23, with a majority of members voting in favour of allowing their use but imposing import and usage limitations. Some members sought a ban, though, expressing concern about the affect of the chemicals on the environment and their long-term impact on people’s health.