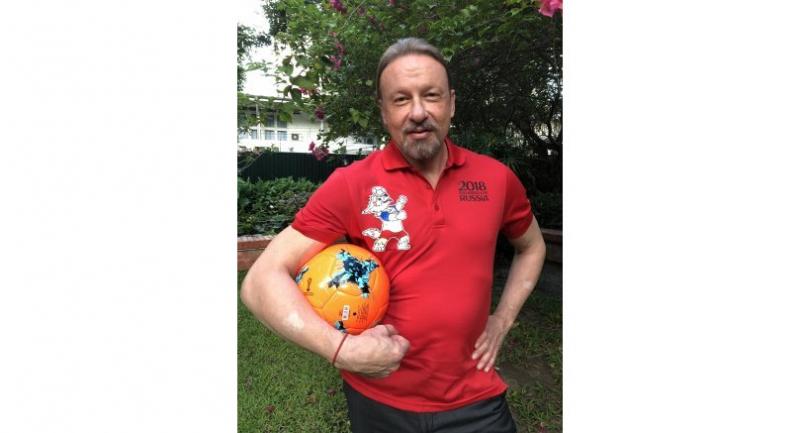 By JINTANA PANYAARVUDH
THE SUNDAY NATION

THE COUNTDOWN has begun for one of the world’s greatest sporting events.

Russian Ambassador to Thailand Kirill Barsky has urged football fans nationwide to enjoy the 2018 World Cup, which his country is hosting, not only for the sporting excitement but also for the exciting insights into his country. The Fifa World Cup will take place in 11 Russian cities from June 14 to July 15.

“There will be a lot to see during the broadcast from Russia beyond the football itself. Please take note of the beautiful stadiums we have built, the scenic views of the cities where the matches will be played and the smiling faces of the Russian people,” Barsky told The Nation. The opening match of the quadrennial football extravaganza kicks off on Thursday.

“So my suggestion to football fans is to enjoy this spectacular festival of sports and friendship,” he said.

As the host nation, Russia is providing special treatments or privileges for fans going to watch the World Cup, he said.

Every football fan going to Russia to watch the games will get a Fan ID, which gives the bearer the right to visa-free entry and free travel on days of the matches in the host cities. Special city tours will be organised for the Fan ID owners free of charge.

Those who fail to get tickets need not be disheartened; they can enjoy the games at Special Fan Fests to be organised in every host city. In addition to watching the game on a large screen, visitors will enjoy live music and be able to hobnob with football stars.

The ambassador said he would be watching the games on TV in Bangkok and be cheering wholeheartedly the Russian team.

“All the teams at the World Cup are strong, so every match should be played like it’s your last match,” he said. The embassy plans to organise friendly football games with its Thai associates from several governmental agencies one of these days, the ambassador said. A woman poses for pictures in front of a banner featuring Zabivaka, the official mascot of the upcoming 2018 FIFA World Cup, outside Olymp Stadium, Iceland's national football team's training site, in the village of Kabardinka outside Gelendzhik on June 9, 2018. /AFP

The number of people in the Kingdom watching the matches this year is likely to be around 11 million due to the nationwide free broadcast and the convenient time at which the matches will be played, Kasikorn Research Centre forecast on Friday. Most of the matches start as early as 7pm while the last match is at 1am.

Thanks to the “must-have” rule of the broadcast regulator, holders of broadcasting rights for seven major sports programmes, including the Olympics and the Fifa World Cup, must broadcast the events on free TV channels.

TrueVisions Group, owned by True Corporation, acquired the right to broadcast all the 64 Russian World Cup matches. The matches will be broadcast on Amarin TV, Channel 5 and True4U stations live in high definition (HD).

The country’s leading pay-TV operator is also the first country in Asean to offer live coverage in 4K format for its platinum and gold package subscribers. Broadcasts on 4K are four times clearer than the high definition format. The football world’s biggest event is also expected to boost the economy and stimulate more spending.

Thanawat Pholwichai, director of the Centre for Economic and Business Forecasting of the University of the Thai Chamber of Commerce, said recently that his centre forecasts cash flow to reach Bt78.385 billion.

He expected the Cup to help the economy expand by 0.2-0.3 per cent this year. However, only Bt50 billion would boost gross domestic product but the rest will flow out of the country for online gambling.

Many business operators have launched new campaigns and promotions ahead of the tournament. The windfall will go to consumer products, fast food and food delivery services.

The campaign focuses on five-time World Player of the Year Lionel Messi, who is featured in Lay’s commercials and other supporting media. During the first four months of 2018, the market grew by 17.8 per cent compared to the year before and has been among the top three segments with the highest growth, he added. Food delivery service is another sector that is expected to benefit.

Noppadol Vashirakovit, product manager of Line Man, an on-demand-assistant service, said football fans’ behaviours this time might be different from the past, especially for people living in the hustle and bustle of Bangkok and having less time to hang out with friends to watch the matches together at night.

They would rather enjoy watching the match at home or with nearby friends in small groups, for which Line Man would be the best solution, he said. With a variety of special promotions from popular restaurants that it has provided, especially for World Cup fans, Line Man believes that its food delivery service will see big growth and believes the demand for its service during this period will increase by at least 15 per cent. A woman walks in front of The Local Hotel, Egypt's national football team's base camp hotel, in Grozny on June 9, 2018, ahead of the Russia 2018 World Cup. / AFP

During the World Cup broadcasts, ride-hailing company Grab, which provides GrabFood, expects to see its food delivery service gain from the increased demand for delivery of meals after 6pm, as customers tend to have more gatherings and parties, requiring group meals, drinks and snacks, said Tarin Thaniyavarn, country head of Grab Thailand.

Grab found its daily orders for GrabFood – a ride-hailing app for deliveries – have grown by more than 440 per cent during the first quarter of this year. Grab has prepared various promotions to cater to football fans, such as extending delivery hours from 9am-10pm to 9am until midnight, and is also partnering with merchants for special promotions.