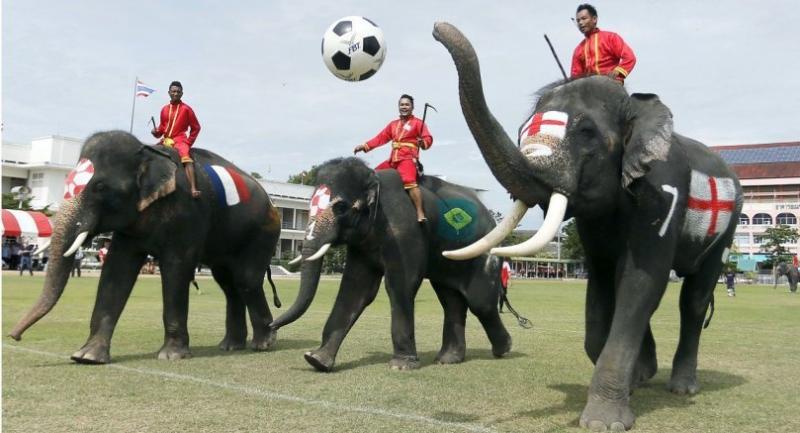 Nine elephants from the Ayutthaya Elephant Palace and Royal Kraal in Phra Nakhon Sri Ayutthaya joined local youths in a friendly football match on Tuesday as part of a campaign against gambling on football ahead of the 2018 FIFA World Cup, which is being held in Russia from June 14 to July 15.

Following a parade of elephants and football fans into the Ayutthaya Wittayalai School stadium, the tamed pachyderms, adorned with colourful cheering-squad paints, engaged in a short match and a free-kick contest among elephants, before joining in a short friendly game with a team of human opponents – the school’s youth athletes. The activity was held in the hope of boosting the tourism of the historic province and city of Ayutthaya – the second Siamese capital, after Sukhothai – and to get people, especially children and youths, to watch the World Cup matches in the next four weeks without placing bets. In a separate attempt to help students enjoy international football matches without affecting their academic performance, Nakhon Ratchasima’s Ratchasima Wittayalai School director Boonlert Poungphetch instructed staff to record on video key matches – which often air late at night due to the event-hosting country’s time schedule – at the World Cup and other tournaments, so that the 4,200 students of his all-boys secondary school could watch them during lunch breaks, instead of staying up to watch the games live and thus waking up late for school. The school, which has seven football teams and has won many provincial and national trophies, has also advised students to watch the matches constructively, observing and learning techniques from the world-class athletes on show in order to improve their own sport skills.