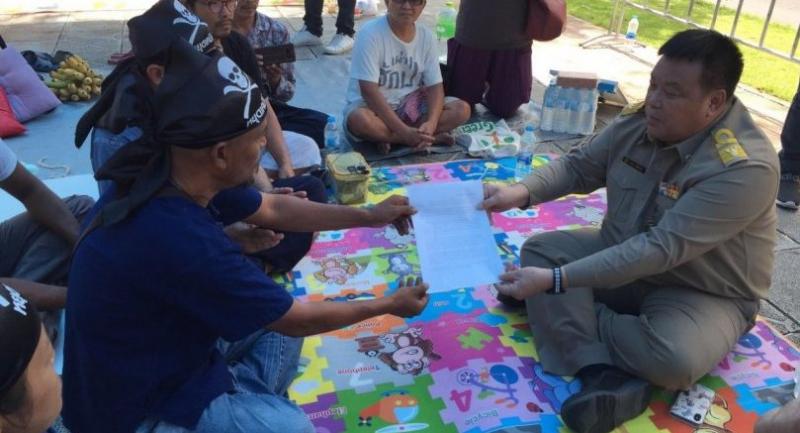 PROTESTERS HAVE demanded that Prime Minister General Prayut Chan-o-cha |immediately ban paraquat, glyphosate and chlorpyrifos or they will march to Government House.

The demonstrators, led by the Phatthalung Organic Farmer’s Network, yesterday said that in order to protect the public health and environment from contamination by harmful herbicides and pesticides, they will march to Government House and stage a prolonged protest there unless their three appeals to the government are heeded.

The protesters, who are mostly organic farmers, have gathered in front of the Agriculture and Cooperatives Ministry since last Thursday |to protest a decision by the Hazardous Substance Committee to allow ongoing use of the three farm chemicals in Thailand.

They pointed to evidence that prolonged use of the harmful chemicals had already caused widespread contamination of the environment, with not even organic farms spared.

Their petition demands that Prayut exercise his Article 44 powers to over-rule the Hazardous Substance Committee and ban the use of paraquat and glyphosate by the end of 2019, and to implement clear measures to restrict the use of chlorpyrifos, especially in the headwater and organic-farming areas, as per recent resolutions of the Public Health Ministry.

They also asked the PM to order the Public Health Ministry to educate people about the dangers of the harmful chemicals and to ignore the Agriculture and Cooperatives Ministry’s proposal to set up another committee to consider a ban.

Protest leader Amnart Khetkhao said if they do not get satisfactory feedback on their demands from the government by 9am today, protestors will march from the current venue at the Agriculture and Cooperatives Ministry to Government House.

Metropolitan Police had earlier secured a 50-metre perimeter around Government House due to frequent demonstrations in the area.

Agriculture and Cooperatives Ministry inspector Derake Tonpayom met with and received the petition from the protesters.

Derake assured them the government’s first priority is to protect the people’s health and environment.

The Ministry also supports organic farming, he told them, but the use of chemicals is still necessary for large-scale commercial farming.

Protestor Supaporn Songchu said that organic farms throughout the country, including her chemical-free fish farm in Phatthalung, have suffered greatly from herbicide and |pesticide contamination in the environment, which had also contaminated their organic crops.

“The prolonged and heavy use of herbicides and pesticides for many decades has already left large amounts of chemical residues in soil, water and air, so even though we grow food with chemical-free methods in that environment, our crops are contaminated with chemicals no matter what,” Supaporn said.

It has been proven that 40 years of chemical farming promotion by the authorities is not only unsustainable, but also drives Thai farmers deeper into poverty, said the protest leader.