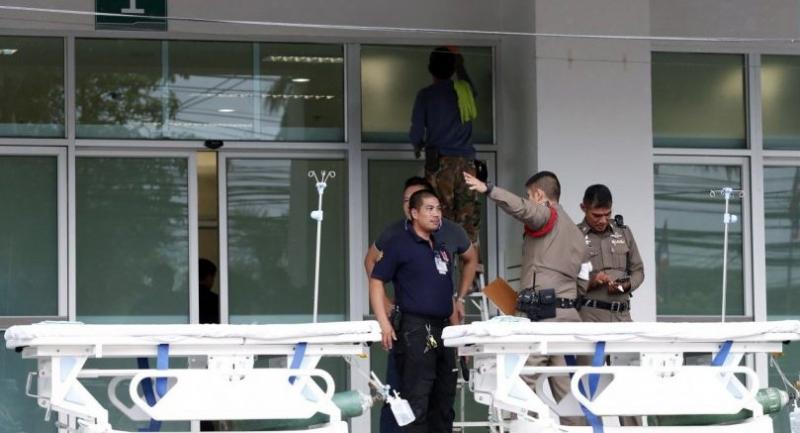 AUTHORITIES AS well the Chiangrai Prachanukroh Hospital were yesterday arranging the quickest possible evacuation and related assistance to the 13 footballers as soon as they come out of the flooded Tham Luang cave in Chiang Rai.

Police have sealed off the area in front of the hospital in Muang district with green garden shades and directed the media crew to the Ban Den Ha School a little further down the road. The Rob Wiang Road section from the intersection behind the hospital and the San Khong intersection was also closed from 3pm onwards, while the nearby San Khong School and Chiang Rai Educational Service Area Office 1 would also be closed. Media members walking to the area opposite the hospital said that reporters, hospital staff members or nearby residents were not allowed to take photos by camera or phones in the area or officials guarding the front area would confiscate their devices. The hospital has arranged another entrance to accommodate other patients and their relatives while reserving the front entrance for the mission to aid the footballers, the observing reporters said.

The “DDay” evacuation operation earlier yesterday had expected the first of the youths to emerge from the cave at around 9pm but it was reported that at least two were brought out as of press time.

According to the previous medical aid plan, the footballers would be kept in the hospital’s well-equipped sterile isolation room for one to two days after being brought out before their parents and relatives could see and visit them. They would receive first-aid at the cave park and then be transported via either a 15-minute helicopter ride or a one-hour ambulance ride to the hospital depending on their condition.

Meanwhile, Chiang Mai-based Suanprung Psychiatric Hospital deputy director and psychiatrist Dr Paritat Silpakit, who led the team assigned to provide mental healthcare to the youths and their relatives, said the team would provide assistance to them depending on their condition and would task another local team in Mae Sai district to follow up on the long-term progress in their mental recovery.

In the meantime, Chiang Rai Social Development and Human Security Office head Anira Thinont affirmed that her agency officials, who were taking care of the youths’ relatives in the tents outside the cave, would follow the relatives to the hospital once the youths are brought out.

The hospital has prepared accommodation for 50 registered relatives of the victims in nearby places so they could visit the youths once the boys are cleared by the preliminary check-up in the sterilised room.

Anira said the officials would gather information on the youths for the Chiang Rai Child and Family Home to devise measures for assistance in various aspects as per the Child Protection Act.

Home director Charan Siriwan said the officials would help the youths with their long-term mental recovery while also providing necessary aid to assistant coach Ekkapon Chantawongse, who was 25 and was beyond their authority, and his relatives.