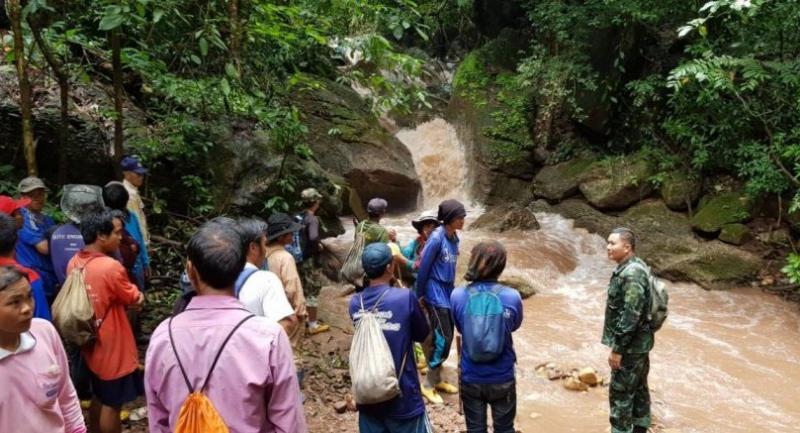 Members of a search party yesterday continue to look for a local Nan woman swept away on Saturday in a torrential creek in the province’s Pua district.

WITH FLOODS expected in many provinces from downpours triggered by tropical storm Son-Tinh, the search continued yesterday for a 55-year-old woman who went missing in floodwaters on Saturday in Nan province.

The search for Feuy Inpa was hampered by torrents and the search area in Pua district is inaccessible by car.

Feuy and her husband Tah Inpa, 58, were heading home after farming at 5.30pm on Saturday when they were hit by fast-moving water while crossing the Lam Huai Kha creek. The incident left Tah with a hip injury. The search party is being led by Pua district chief Chanathip Semyaem.

In Tak province, three days of downpours have caused Moei River in Tha Song Yang district to cause four-metre-deep floods, hitting riverside homes on both the Thai and Myanmar sides. In Tha Song Yang, 45 families were evacuated from their heavily flooded homes. A bridge across Huai Mae Song, linking Tambon Mae Song to Tambon Mae Usu in Tha Song Yang, was swept away by a flash flood.

Meanwhile, Kanchanaburi disaster prevention office head Arun Pinta reported that more than 1,000 families in 15 villages in Tambon Nong Loo and Tambon Rai Wo of Sangkhla Buri district were affected by flood during July 19-20. Four temples, two roads, seven government offices and about 300 rai (48 hectares) of farmlands were also damaged in the floods. Officials delivered food and commodity items to the affected residents, including the 262 people who had been evacuated from the flood-affected area and moved to temporary shelter at a football field in Tambon Lai Wo since July 21.

He said downstream residents were informed in advance.