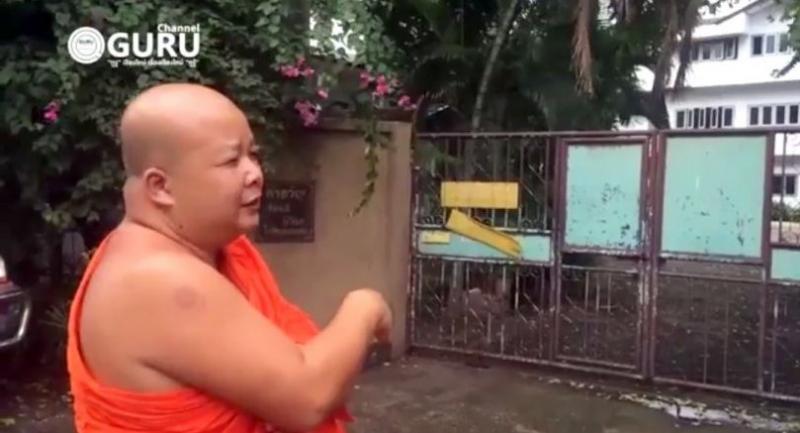 CHIANG MAI’S Lam Chang community is calling on the National Buddhism Office (NBO) to investigate a deal that it believes will see centuries-old temple land turned over to the private sector for commercial gains. The abandoned temple land in Muang district should benefit the public instead of reaping gains for a private company, the residents said.

On Friday, a network of local residents called “Chumchon Muang Rak Chiang Mai” held a rally at the Three Kings Monument plaza in downtown Chiang Mai to voice their objections against alleged plans to set up a “hotel school” on the land of Wat Ton Poon. The rally was led by Lam Chang community’s leading member Pan-ngam Sommana. They also called on the NBO to reveal the contents of the lease and explain the rights the private sector has on the land.

Pan-ngam said the plot should ideally be used by the community and that the neighbouring Wat Lam Chang was planning to set up a school teaching traditional Lanna crafts and was willing to pay the original leasing fees of Bt60,000 per year. She explained that the plot was initially part of Wat Lam Chang and its abbot had leased it out to Anusuksa School in 1957. The school, however, shut down in 2014-2015.

In 1967, the NBO took over the management of the plot after a road was built through it.

Pan-ngam said the community wanted to look at the lease because it was supposed to be on one-year renewal terms and not a 30-year one. However, she said, they had been told that the original document backing this so-called long-term lease had been lost in a flood.

Prior to the protest, Wat Lam Chang abbot Phra Phru Palad Anon Wisuttho said members of the community were still waiting for a response to the petitions they had sent to related agencies.

The nearly 2-rai (.32-hectare) plot was transferred about a year ago to a new tenant – who now has the right to use the plot for 25 years, confirmed Ubolpan Khanpaneuk, director of the Chiang Mai Buddhism Office. Ubolpan added that the new tenant wanted to stick with the original plan to use the land for educational purposes by building a school to train personnel for the hospitality sector.

“The residents’ worries that a hotel will be set up on the plot isn’t a good enough reason to cancel the lease,” Ubolpan said. No wrongdoing has been committed and the law protects the tenant, he said, adding that “the decision-making power is with the central committee – not the provincial NBO office”.

Many plots have been leased to hospitality companies, he said, and all is fine as long as the tenants do not violate their lease and have the central committee’s approval.

However, these explanations did not ease the residents’ worries, with many saying the “hotel school” would have the same facilities as a hotel, and people would stay and participate in activities that are inappropriate for a religious site.

Some residents also pointed out that a tenant had leased the plot in 2015 and tried to open a hotel, but dropped the plan after facing strong opposition.

A post advertising the sale of a 30-year lease of the land and seven buildings for Bt50 million had been put on social media last year, the residents said. They later learned that land had been leased out and the new tenant had applied with the Nakhon Chiang Mai Municipality for permission to build a “hotel school”. It was this discovery that led them to demand an investigation. Phra Phru Palad Anon said that soon after the Anusuksa School had shut down, his temple had tried to rent it from the NBO for community and religious purposes at the original rental fee of Bt60,000. However, the NBO officials had said that the previous lease was still in effect.

“So how can the lease suddenly be in the hands of another person who now wants to build a ‘hotel school’?” the abbot asked. “This is why the community and my temple want the NBO to look into this and review the old lease so the plot can be used for social benefit rather than being used for commercial gain.”