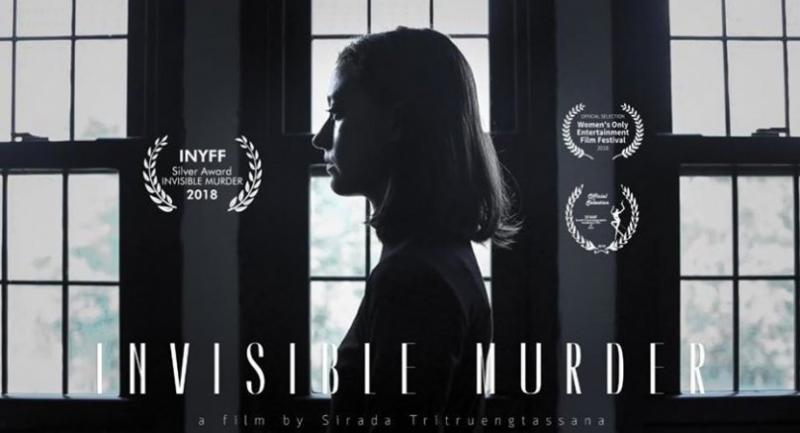 BAGGING AWARDS from two international film festivals, Chulalongkorn University student Sirada Tritrueng-tassana has proved that she excels not only in theory but also in practice.

The 21-year-old produced her award-winning short film “Invisible Murder” while she was a second-year student at the university’s Faculty of Communication Arts.

“I am the first in my class to have embarked on film production,” she said. “I jumped into it even before I became a third-year student.”

When she entered the faculty, she made her name as the highest scorer in the country’s 2015 central university admission system.

Her reputation continued to grow after she won a Silver Award from the Women Filmmakers category at the New York Inter-national Film Festival earlier this year. She also earned the Best Editing in Short Film category from the Chile-based South Film and Arts Academy Festival.

She said the crew in her production team were rookies and “it took us a few days to shoot the film, and about a week to edit our footage”.

Sirada said she was inspired to make “Invisible Murder” by her feelings at the time she entered Chulalongkorn University.

“I felt lonely at one point because moving from a school to a university was quite a big change in my life,” she said.

In Sirada’s view, “Invisible Murder” is about exploring the feelings of a woman who feels invisible and wants to do something to make her presence felt.

When completed, Sirada submitted her film to the organisers of several film festivals for consideration.

“Most of the time, I got rejected. International films won’t accept a new face easily,” she said.

But she never gave up, and it has paid off – the film has won awards, in addition to being accepted for screening at two international festivals.

As for advice for aspiring filmmakers, Sirada said: “Stay true to your feelings and be firm on your concepts. Don’t let others dictate what to do with your film.”

Every film has a message, she said. It does not matter if a film will make money because the most important thing is the audience response.

It was her love for films that led Sirada to enrol in the CU Faculty of Communication Arts. “Films communicate ideas. They serve not just as entertainment but they also have hidden messages,” she said.

She added that Thai films were second to none in terms of appeal.

Asked about her favourite film, she quickly responded “Bad Genius”, the story of a straight-A student who devises a cheating scheme that eventually becomes internationally famous. The film has been screened across the world.

Looking to the future, Sirada said she hoped she would one day become a full-time filmmaker. “I want to produce a film for screening inside a theatre. I hope I can bring my parents and friends to the screening,” she said.