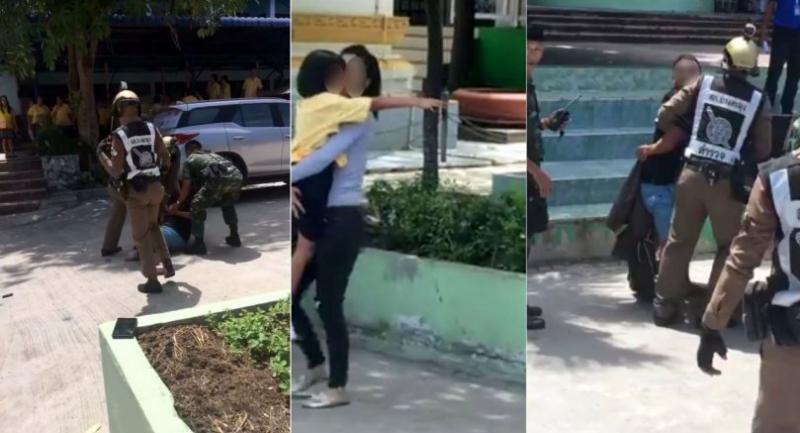 POLICE officers’ “heavy-handed” intervention in a long-standing domestic dispute over child custody at a Chon Buri primary school may result in lawsuits.

A 35-year-old man appeared in a four-minute viral video clip that showed police dragging him away from his two children in front of teachers and students at a primary school in Chon Buri’s Bang Lamung district on Tuesday.

Thara Welachaeng is now being urged to sue the arresting officers who are said to have acted upon his estranged wife’s alleged faulty claim that he was a drug user who liked to carry a gun. Meanwhile, Chon Buri police chief Pol Maj-General Nanthachat Supamongkol said on Thursday that police would use this “mistake” to prevent it happening again and he affirmed that a fact-finding committee has already been set to probe what happened.

Deputy superintendent Pol Lt-Colonel Daranpop Sathongyoo said the children’s mother had told officers that she had obtained the kids’ full custody, even though the dispute had not been resolved and required police to attend the school to check that the children were alright.

Bang Lamung station superintendent Pol Colonel Chakthip Parapathakul said the result of an investigation into how police handled the case would depend solely on the evidence.

Prominent lawyer Kerdpol Kaewkerd said Thara should sue the police and army over their excessive use of force, besides consider pressing charges against his estranged wife and her relatives for assault and making false accusations.

“This case is an illegal apprehension of a person; there was no arrest warrant issued by a court, there was no wrongdoing committed in front of officers and no illegal items were found on him, as his estranged wife had [falsely] claimed,” the lawyer said.

Police’s claim that Thara was making a scene and therefore had to be escorted away didn’t justify the heavy-handed treatment, he said.

Thara was lunching peacefully at the school with his two daughters when his estranged wife – from whom he had separated five years ago – and her relatives showed up along with police and army officers, who said they had been told he had drugs and a weapon in his possession.

Officers, who subdued the screaming man in a manner described by Thai social media as rough treatment, didn’t find any illegal items on him. Thara’s estranged wife then took the opportunity to take the children away to Kanchanaburi “for fear of their safety” and failed to see police later as promised.

Only when he arrived at the police station did he learn about his estranged wife’s drugs and gun accusations with the Dhamrongtham Centre. Thara was later released without charges and underwent a medical examination with a view to filing a counter-claim.

Royal Thai Police deputy spokesman Pol Colonel Krissana Patanacharoen, meanwhile, insisted police had been thoroughly trained in situation assessment and the best suspect-arresting tactics through the use of gradual increases in force, to ensure safety to all concerned: the officers, the suspect and others at the scene.

“If anyone thinks a police action is inappropriate, he can file a complaint. Please also be sympathetic and spare a thought for the officers, who are taking risks to intervene with suspects who may resist or carry arms,” he said.

Krissana said the video clip of Thara’s arrest was only a part of what happened and police performed their duty without using excessive force.