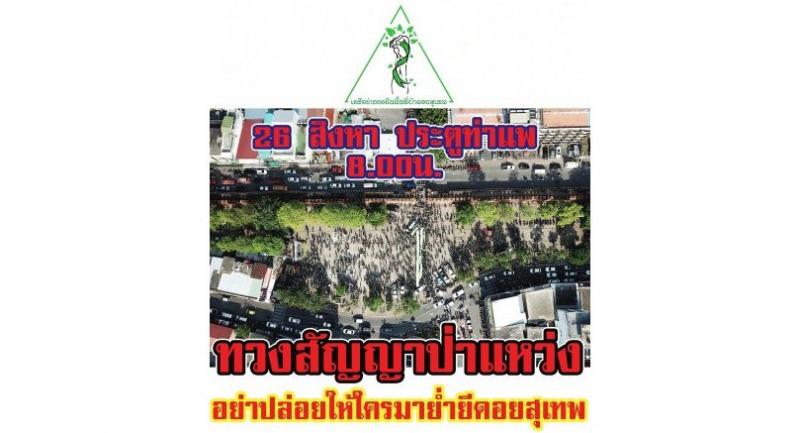 The new banner released and shared on social media to invite the public to join the rally set on August 26 by the network.

THE resolution to build a new office and residences for the Court of Appeals Region 5 in Chiang Rai has nothing to do with the demand to remove the court properties that are already encroaching on the pristine forest on Doi Suthep, a representative of the Doi Suthep Forest Reclamation Network said yesterday.

Teerasak Rupsuwan, the group’s coordinator, said the resolution stopped short of clearly addressing the issue of properties on Doi Suthep, adding that the group will hold a rally on August 26 to demand the removal of all disputed properties.

At least 45 houses plus nine condominiums built for the Court of Appeals are said to be encroaching on the forest of Doi Suthep.

Meanwhile, Teerasak cited the 20 years it has taken to gain permissions and complete the project, saying it is worried nothing will be done if a deadline is not set.

“How long will we have to wait for the properties on Doi Suthep to be relocated?” Teerasak asked, adding that residents in the nine condominiums should move down to the court-owned four condos outside the disputed area.

The group will be meeting provincial authorities on Thursday, and expect to see clear answers during the rally, Teerasak said.

The Judicial Administration Commission held a meeting in Chiang Rai province last Friday and decided to have the Judiciary Office negotiate with the Department of Agriculture to use its land for the construction of office and residences for the Court of Appeals Region 5. A new budget will be sought for this project.

The Judiciary Office’s secretary-general, Sarawut Benjakul, said that once this project was completed, the Court of Appeals Region 5 and residences on Doi Suthep would be moved to the new location. The new compound will be no bigger than 40 rai and only condominiums will be built to save space.