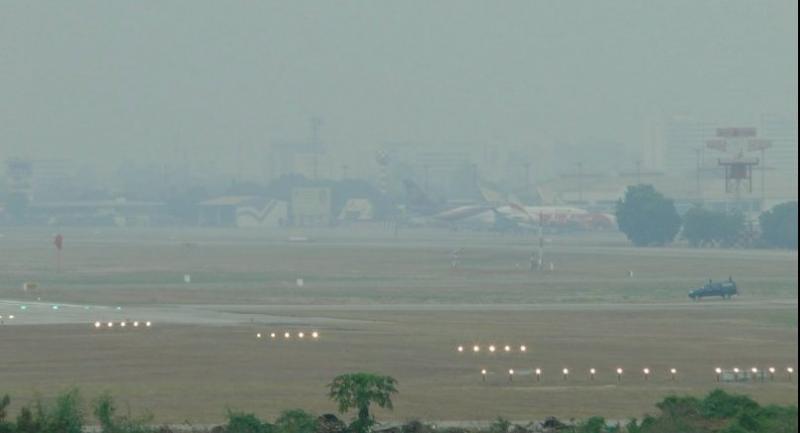 From next month, the Pollution Control Department (PCD) will set PM2.5 particles as an indicator of Thailand’s air quality, but the move does not ease the concerns of people in the know.

“I must tell you that the PCD intend to use the ‘24-hour mean’ as the indicator and that may be misleading,” said Tara Buakamsri, the country director for Thailand at Greenpeace Southeast Asia.

He pointed out when the quantity of PM2.5 particles was calculated across a 24-hour period, it could sometimes hide the fact that air pollution had reached an unsafe level during some hours of the day.

According to the World Health Organisation (WHO), about 7 million people die every year because of exposure to both outdoor and household air pollution. Since 2013, WHO has described PM2.5, a tiny particle that is 2.5 microns or less in width, as carcinogenic. PM2.5 can easily enter the respiratory system, lungs and blood vessels. In Thailand’s Chiang Mai province, 950 people were rushed to Chiang Dao Hospital’s emergency department between March and April in 2016 and 2017 as the province suffered a serious smog crisis. The patients were diagnosed with emphysema, ischaemic heart disease, stroke and lung inflammation. Of that group, 68 died. Another 477 locals died in the same period.

“We cannot say that they died of pollution but statistics show that when the amount of PM2.5 rises by 10 micrograms per cubic metre of air, the death rate rises by 0.15 per cent,” said Professor Chaicharn Phothirat, who heads the Department of Internal Medicine, Faculty of Medicine, at Chiang Mai University.

Chaicharn said his studies also found links between the soaring volume of PM2.5 and PM10 particles, and hospitalisations. PM10 refers to particles whose diameter is no more than 10 micrometres.

PCD, an official government agency, has for more than a decade judged air quality solely on the basis of PM10 indications. But last year, Greenpeace brought public attention to Thailand’s failure to include PM2.5 in its official air-quality monitoring, and thus not fully reflecting actual risks in many provinces.

As air pollution has become increasingly visible in the form of smog, the Greenpeace position received widespread attention. PCD felt the heat and revisited its air-quality criteria.

Currently, about 28 air-quality monitoring stations in Thailand are equipped with devices to measure the amount of PM2.5. Before the end of next year, as many as 53 stations should have had the devices installed.

PCD director-general Sunee Piyapanpong said that starting from next month, people would be able to check air quality by themselves via the Air4thai application and http://air4thai.pcd.go.th. The app is compatible with both Android and iOS devices.

Sunee said when people get updates about air quality, they will then be better able to protect themselves. The WHO, however, maintains that PM2.5 poses a health threat when above 10 micrograms per cubic metre of air and at 10-14 micrograms, PM2.5 has been proven to be unhealthy for sensitive groups.

“But let me tell you that not all developed countries use WHO criteria,” Thalerngsak said.

Thailand is one of those nations that will follow its own levels. Only when PM2.5 soars beyond 100 micrograms per cubic metres of air will the air quality be labelled unacceptable under PCD’s official Thai standard.

The agency is unable to use the same criteria as the WHO, said Thalerngsak. The reason, he said, is that measures required to keep the air conditions within the WHO-prescribed safe level would likely face stiff opposition from Thai society.

“Will people agree not to drive into the heart of Bangkok?” PCD’s Thalerngsak asked. Exhaust fumes, he said. rank among the major sources of PM2.5, alongside agricultural fires and various other human-related activities.

Chaicharn, however, complained that the PCD criteria would only give people the illusion that their air was good enough to breathe.

“In fact, we should embrace the WHO criteria no matter how hard it is for us to achieve that kind of air quality, because that will mean we make a step towards that goal,” the medical lecturer said. In his opinion, Thai authorities should go ahead with tangible measures such as requiring that motorists use better cars and better fuel quality. He wants the nation to adopt something like the European emission standards, which define acceptable limits for exhaust emissions from new vehicles sold in the European Union and European Economic Area member states.

Chaicharn also expects Thai authorities to hold discussions with neighbouring countries, including Myanmar, with an aim to reduce the number of hotspots or agricultural fires.

“These days, Chiang Mai people live with smog between three and four months a year,” he lamented. “We can’t wait for rain or the gods to help. We need to take actions to save our health.” Recognising the threat posed by polluted air, active groups in Chiang Mai in early 2018 began assessing air quality in their province based on PM2.5. “We have also developed the Dustboy app to check the amount of PM2.5 on an hourly basis, not on a daily basis, to see the actual situation,” Chaicharn said.

Chiang Mai is well known for the pollution caused by agricultural fires from neighbouring countries. But Chaicharn said other provinces, including far-away Bangkok, are also suffering from agricultural smoke from Cambodia and Laos. Thalerngsak argued that the PCD had already done the best of what was practically possible right now. “As for measures like Euro 5 [of the European Emission Standard], we are in the process of proposing it to the National Environment Board. But the process will take time because it involves many parties. The government will have to talk to refineries and more,” he said.