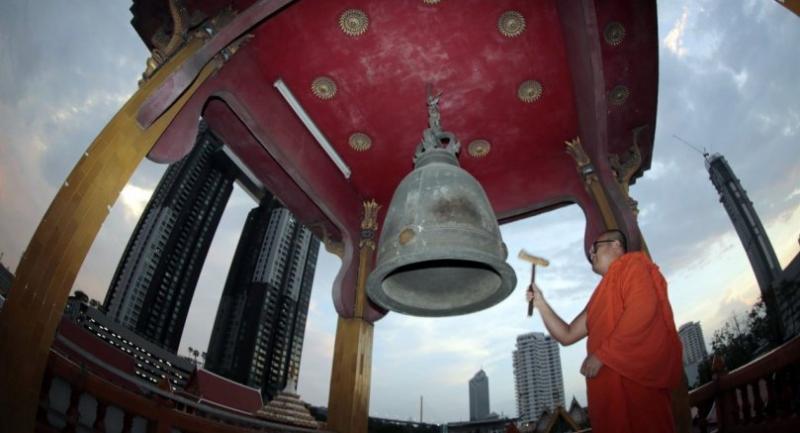 A monk at Wat Sai in Bangkok’s Rama III area rings the temple bell yesterday as per the traditional practice during the Buddhist Lent period, despite complaints from condominium residents about the sound disturbing their sleep.

HOT DEBATES on social media have prompted Buddhism’s highest body – as well as related authorities – to seek middle-ground solutions, after complaints were filed by two residents of a condominium built less than a decade ago against a 300-year-old Bangkok temple’s pre-dawn practice of ringing the bell. Later yesterday, Bangkok Governor Pol General Aswin Kwanmuang and Bang Kho Laem district office director Anan Khaipan, who also visited the temple, said they would hold meetings on October 10 to resolve this issue. The condominium, the temple and the district office – as well as nearby community residents – will attend the talks.

“We have to find a common ground where monks can perform their monastic duties fully while nearby community residents don’t feel that their rights are violated,” said Sipbavorn Kaew-ngam, secretariat office director of the Sangha Supreme Council (SSC). The SSC yesterday dispatched officials on a fact-finding mission to Wat Sai in the Rama III area in an effort to find a solution to this sensitive matter.

Sipbavorn said that although similar issues had been raised in other communities, residents accepted temple explanations about the need for monastic activities during the three-month Buddhist Lent period. During this period, monks must strictly perform routines – including the bell-ringing to call all monks to attend morning prayers and collect alms – to set a good example to newly-ordained members. In a follow-up to a warning issued to the temple by the district office during the Buddhist Lent period last year, it this week asked the temple to tone down the daily ringing of the 1.2-metre-tall bell from 3.30am to 4am to avoid disturbing nearby residents. Upon receiving the complaint letter, the abbot instructed monks to ring the bell gently to lower its sound but insisted he could not totally stop the ringing of the bell, as it was a traditional practice during the Buddhist Lent period.

A representative from the condominium management said they understood the temple’s activities. They said they had no idea who had filed the complaints, while district office director Anan said his office did not specifically ask the temple to tone down the bell-ringing. Anan has been instructed by Aswin to respect the abbot’s wishes and to explain that the office would help resolve the problem.

Aswin said the temple would be allowed to continue the bell-ringing practice. He also insisted that the two residents who had filed the complaints had no special connection with the district office. “This is a long-standing tradition, how can it be stopped? It would be easier for the plaintiffs to move away from the temple area,” Aswin said.

The case has led to heated debate on Thai social media, with many siding with the temple. Among the commentators was Phra Maha Praiwan Wannabut from Wat Soi Thong. The outspoken monk said that times and context had changed, and so the temple bell-ringing that was once so welcome in rural communities of old was perceived differently in urban communities. The city lifestyle is different, he said, with temples and nearby people not interacting and thus lacking a sense of mutual dependence, he said.

“I sympathise with the people’s wish to sleep fully after a day of hard work,” he said. “But this small matter can be solved by the parties.”