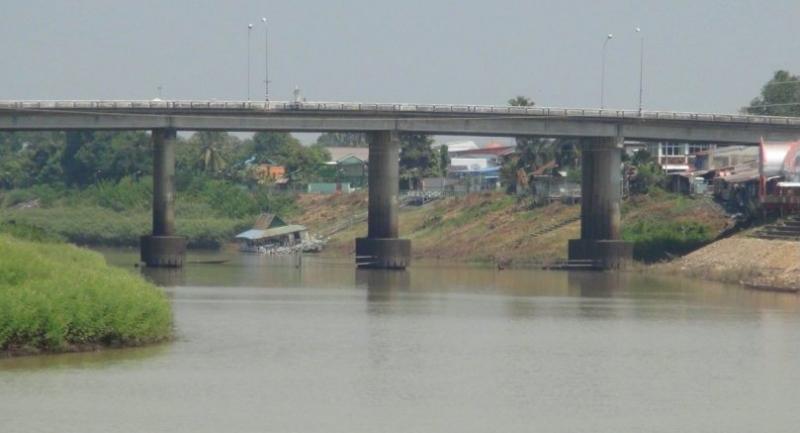 The Mun River passing through Buri Ram’s Satuek district is running much lower than usual yesterday due to drought, exposing the bottom section of the bridge’s pillars. FARMERS are being urged to store as much water as possible and carefully plan their farming needs, as most areas in the Northeast and some parts of the North and Central areas will have no water for agriculture during the coming dry season.

With the rainy season ending within the next 20 days, the Royal Irrigation Department (RID) yesterday raised concerns about a possible drought and water shortage in many parts of Thailand, after the agency’s Smart Water Operation Centre revealed that 35 reservoirs across the country have stored water below 30 per cent of capacity, and 95 reservoirs have water at 30 to 60 per cent of capacity. A total of 160 reservoirs are running low on water, nine of which are large reservoirs in the North, Northeast and Central areas of Thailand. They include Thap Salao Dam in Uthai Thani province (28 per cent), Mae Mok Dam in Lampang province (34 per cent), and Ubonrat Dam in Khon Kaen province (36 per cent).

Due to the looming water shortage in the upper part of Thailand, RID director-general Thongplew Kongjun stressed that the department’s local offices in the northern, northeastern, eastern, western, and central provinces were now prioritising collection and storing of water in the reservoirs to the maximum extent possible during the remaining part of rainy season. The resources will have to last for the entire dry season from mid-October until May 2019,

Among the areas of concern, nine provinces in the lower part of the Northeast – Khon Kaen, Maha Sarakham, Roi Et, Kalasin, Chaiyaphom, Nakhon Ratchasima, Buri Ram, Surin, and Srisaket – are experiencing the most serious shortage of water, with 53 out of 160 reservoirs with low water resources situated in these provinces.

Thongplew said the RID had already strategised a water management plan for the upcoming dry season. In reservoirs with stored water below 60 per cent of dam capacity, the water discharge for agriculture will be limited to save water for domestic consumption and to sustain the ecology. Where reservoirs have less than 30 per cent of water stored, irrigation for farming will be completely ceased to ensure sufficient water for residential and business sectors.

Thongplew is urging that residents of these provinces use water wisely to avoid a shortage. Farmers are being asked to shift to crops that consume less water, or avoid farming during the dry season so as to prevent crop damage and financial loss to the agricultural sector.

Sutat Weesakul, Hydro and Agro Informatics Institute director, said that based on the long-term weather forecast, he expected that Thailand would face more arid conditions than usual at the peak of the dry season in the first months of next year, due to a strong El Nino in the Pacific. He suggested that farmers store their own water and refrain from growing a dry season rice crop so as to minimise the impacts of the upcoming drought on their farm. Also yesterday, Deputy Prime Minister General Chatchai Sarikalaya went to Ubonrat Dam to observe the water shortage in Khon Kaen. He shared that he was most worried about the water situation in Ubonrat and Lam Nangrong dams, as their available stored water was extremely low due to a lack of rainfall in the watersheds feeding these dams during this past rainy season.

Chatchai ordered the RID to revise the optimal reservoir rule curve for every dam in the country to match the changing climate and water situation each year, so as to prevent future errors in the water management plan.