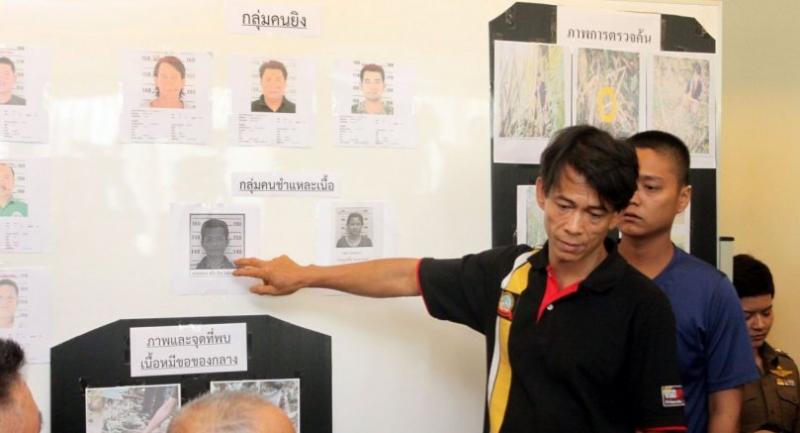 Tata, a Myanmar national, points to a photo of Chira, who was the alleged butcher of a bearcat that Tata admitted to having shot during a night hunt in Sai Yok National Park in Kanchanaburi province early this month.

In testimony to police, suspect says district official was not a part of the hunting party.

A MYANMAR man on Thursday confessed that he had shot a bearcat while hunting at night in Sai Yok National Park in Kanchanaburi province, as his two companions were bad shooters.

Tata, a helper at a monastery, said that Aunsorn Ruen-ngam, one of the district defence volunteers who went out with him on the night of October 6, gave him a rifle after he and another colleague, Sakarn Kaenluang, had failed to kill any animals.

“They tried to shoot many animals but could not hit one. So when Anusorn saw a bearcat on a tree, he gave me the gun, knowing that I had been a hunter in the past. I shot it in the head,” he told deputy national police chief Pol General Srivara Rangsibhramanakul. Tata and Anusorn were on Thursday brought to National Police headquarters in Bangkok for questioning.

The Myanmar man confessed after Anusorn had told police that it was a Karen who had shot the animal.

Tata further said that they brought the bearcat back to the monastery, which was about 400 metres from the spot where the animal was shot.

Another Myanmar helper in the monastery, identified as Chira, butchered the animal, Tata said, adding he put the rest in a black bag and gave it to Anusorn to dump it about 1.1 kilometres from the monastery. The animal’s head was cut and dumped in a gully.

Tata and Anusorn were arrested on October 7 along with Dan Makham Tia district deputy chief Watcharachai Samee-rak, who led a six off-road vehicle group into the national park, and were slapped with multiple charges including hunting in the national park.

National Park officials found the feet of the bearcat in the vehicle of the deputy district chief, who was suspected of killing the animal. He has rejected the accusation. Tata also absolved Watcharachai by saying the district official did not join the hunting expedition that night. He entered the national park and fired some shots as he had promised to do so if his wishes were fulfilled.

Srivara said that the Sai Yok police had arrested 13 of the wanted 14 suspects. Only Chira remained at large.

Tata and Chira face seven charges for alleged poaching and having in possession carcasses of protected animals and guns and ammunition without permits.

Each of the 12 members of Watcharachai’s team will also face 11 charges, Srivara said, without elaborating.