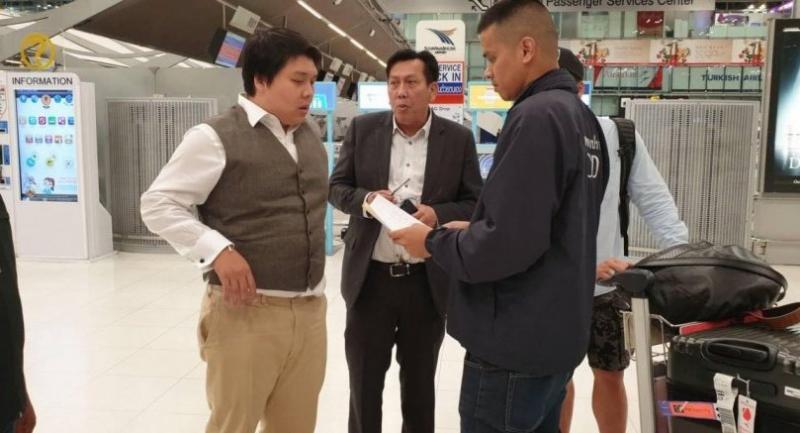 Parinya Jaravijit, a key suspect in an alleged Bt800-million bitcoin investment scam, was arrested on Thursday night at Suvarnabhumi Airport when he arrived back in Thailand.

Parinya - who maintains his innocence - was taken to Ratchadapisek Criminal Court on Friday to apply for his first 12-day detention period (October 12-23). Police objected his bail release on the grounds that he was a flight risk and that the case has caused considerable damages.

Parinya's relatives and his lawyer had prepared assets worth Bt20 million to apply for his bail release.

The 35-year-old Parinya, who facing two charges of colluding in money-laundering and colluding in fraud, was apprehended as he was going through the Suvarnabhumi International Airport's Immigration Police checkpoint at 11.30pm. He was then interrogated at the CSD head office throughout the night with his lawyer present.

CSD deputy chief Pol Colonel Chakrit Sawasdee said that Immigration Police in the US denied Parinya's entry as his passport was revoked, so he was forced to return to Thailand.

Police say the actors and relatives' bank accounts showed millions of baht in deposits reportedly derived from the conversion of the cryptocurrency units transferred by Finnish owner Aarni Saarimaa for bogus investments in Thai stocks and other assets.

Initially, the suspects in the case included businessman Chakris Ahmad and well-known stock investor Prasit Srisuwan, both of whom maintained their innocence. But the damaged person later dropped the charges against the two men following settlement talks in September.

According to Chakrit, Parinya's parents, Suwit and Lertchatkamon Jaravijit, were summoned to hear the charge of colluding in money-laundering on October 17.