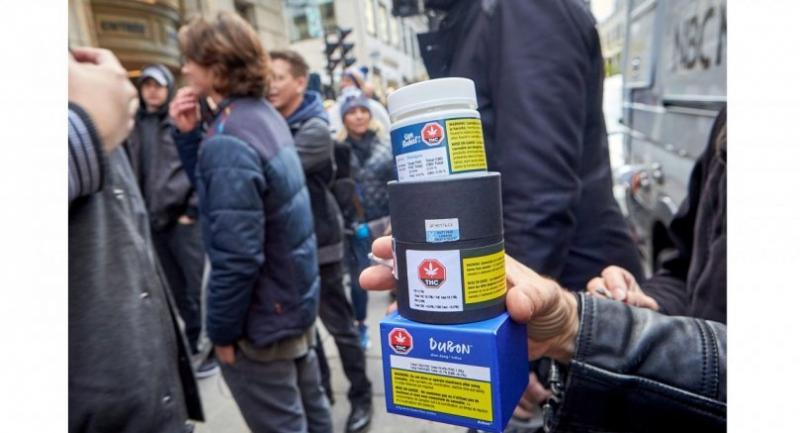 A customer shows a marijuana product that he bought after entering a cannabis store on October 17, 2018 in Montreal, Quebec.// EPA-EFE PHOTO

As the prime minister ponders allowing marijuana for medicinal use, experts point out the benefits of recreational cannabis. DECRIMINALISING cannabis and allowing both medicinal and recreational use would be beneficial not just for public health but also the economy, experts pointed out this week.

Thailand appeared to move one step closer to allowing the medicinal use of cannabis on Friday when Deputy Prime Minister Air Chief Marshall Prajin Juntong handed the proposal over to Prime Minister Prayut Chan-o-cha in person.

If everything goes to plan, Thailand could soon be the first Southeast Asian country to legalise medical marijuana. The Malaysian government is currently holding informal talks on the notion.

Deputy Prime Minister Wissanu Kreu-ngam said a new legal framework is needed to support the legalisation of cannabis for medical use.

Experts, meanwhile, are pointing to the many benefits of legalising cannabis – the biggest being the development of new medicines that could improve people’s wellbeing. They also say that allowing recreational use of marijuana would boost the country’s income through taxation. As lawmakers work on eliminating the legal deadlock to medicinal cannabis, Government Pharmaceutical Organisation (GPO) director Dr Withoon Danwiboon noted that cannabis has many proven medicinal qualities, such as reducing chronic pain, muscle spasms, epilepsy and the side-effects of chemotherapy.

“Decriminalisation of cannabis would provide large benefits to the country and the people, since the GPO would be able to develop better and cheaper medicines from cannabis extract, especially when our country already has a history of using cannabis as medication,” Withoon said.

“We have already started researching new combinations derived from cannabis, and I believe patients will be able to get cannabis-based medication in four years if the government unlocks medicinal cannabis by next year.”

Decriminalisation of cannabis would also open a new frontier for medical research, he said, pointing out that scientists across the world were racing to develop new kinds of medicine from cannabis.

As for the possibility of allowing cannabis for recreational use, Chokwan Kitty Chopaka said the global community was already shifting towards liberalisation and it was inevitable that recreational cannabis would soon become accepted internationally.

Chokwan, a lawyer, spends her free time campaigning on behalf of the Highland Group for the legalisation of cannabis consumption.

“Even though there is small chance of Thailand legalising recreational cannabis at the moment, I believe it will eventually do so because the global trend is moving in that direction,” she said.

Canada legalised the recreational use of cannabis on October 17, allowing Canadians age 18 and up to possess as much as 30 grams of marijuana and grow up to four cannabis plants at home. They can also buy marijuana at authorised stores. People line up outside of a cannabis store in Quebec City, Quebec on October 17, 2018. // AFP PHOTO

Apart from Canada, recreational marijuana has been legalised in Georgia, South Africa and Uruguay. Uruguay was the pioneer, allowing its citizens to freely purchase marijuana in 2013. Georgia and South Africa allow recreational use, but selling cannabis is still forbidden there.

The United States government maintains that cannabis is a narcotic, but the states of Alaska, California, Colorado, Maine, Massachusetts, New Hampshire, Nevada, Oregon and Washington have legalised recreational use. One of the first customers shows to the media the cannabis he just bought on the first day of legal sale of cannabis at the Societe quebecoise du cannabis (SQDC), the government agency responsible for overseeing the sale of recreational marijuana in the province, at a store in Montreal, Canada, 17 October 2018. Recreational marijuana became legal in Canada on 17 October.//  EPA-EFE PHOTO

Chokwan pointed out that cannabis has been scientifically shown to be less harmful to health than alcohol and even less addictive than coffee.

Plus, she said, selling recreational marijuana would boost state income.

It is estimated that the decriminalisation of recreational cannabis will earn Canada more than US$400 million (Bt13 billion) per year, while California has already seen a rise of around $1 billion in annual income thanks to the cannabis trade.

However, Chokwan said, strong political will and efficient measures to prevent the abuse of marijuana would be required.

The two biggest obstacles to the liberalisation of cannabis, she said, were opponents’ outdated beliefs and the 1998 Convention against Illicit Traffic in Narcotic Drugs and Psychotropic Substances, which forbids the use of cannabis for recreational purposes.

“We have a long way to go, but I can assure you that cannabis is not an evil substance like the old myths say,” she said.