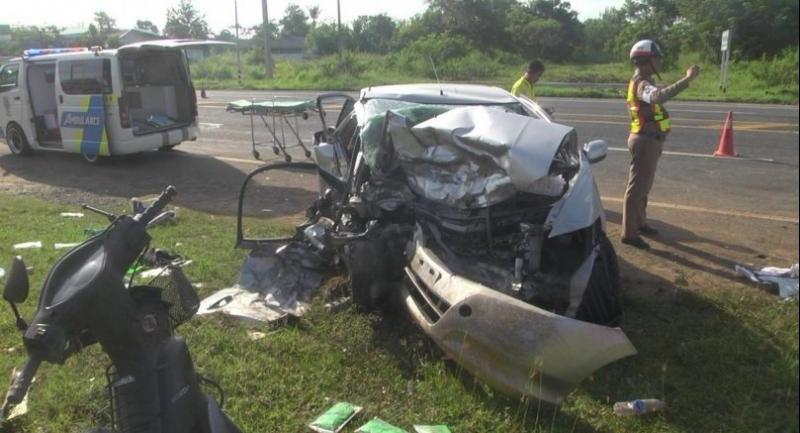 A MEDICAL student and a 10-year-old girl are among the latest victims of Thailand’s notorious roads after their cars crashed head-on in Si Sa Ket province yesterday morning.

The accident killed five people and seriously injured another on a misty day, bringing the spotlight once again on Thailand’s need to promote road safety.

At least 10,794 lives have already been claimed this year, highlighted Dr Taejing Siripanich, secretary-general of the Don’t Drive Drunk Foundation.

That figure is not a full count of the dead, Taejing said yesterday. It is based on statistics compiled between January 1 and October 21, and takes into account only deaths recorded at the actual accident scene.

“This means road fatalities are actually higher because some victims succumb to injuries later in hospital.”

He felt compelled to speak out after several major road accidents over the past weekend. On Sunday, a van skidded off a road, crashed into a roadside tree and caught fire in Kamphaeng Phet province, killing nine Myanmar workers and injuring six others including a Thai driver.

In Khon Kaen province, a bus carrying 32 people overturned on a road. Though all victims were quickly rushed to hospitals, one died during hospitalisation. The lone fatality, Narin Wangcharoen, 20, was a law student at Mahasarakham University.

As of press time, eight victims remained hospitalised due to serious injuries. “Two of them are in critical condition,” he said after visiting the victims. According to Somsak, the bus was covered by insurance and carried the legally required safety equipment. The bus driver also passed a blood-alcohol test.

“So, the accident might have occurred because of the slippery road,” he said.

Land Transport Department director-general Peerapol Thavornsupa-charoen said the van at the centre of the fatal road accident in Kamphaeng Phet, however, had apparently violated laws. “Laws prohibit a van from carrying more than 14 passengers. But at the time of the accident, this van had 15 persons,” he noted.

Peerapol said if Promwat was also found to have deliberately jammed the van’s GPS system, he would face an additional fine of Bt55,000. Authorities use data from GPS devices to check the speed of public-transport vehicles. However, the van’s GPS system had not delivered consistent data, raising suspicions that Promwat may have been speeding at the time of the Sunday morning accident.