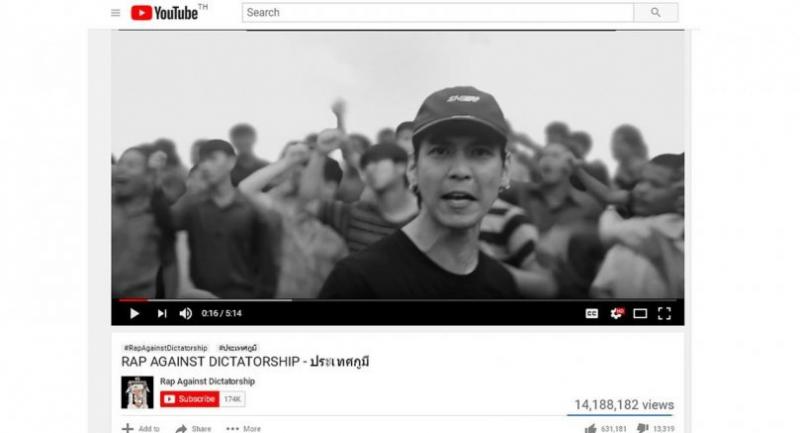 The anti-military dictatorship rap song unmasks the “corrupt” military government who are presenting themselves as “heroes,” some say.

Prathet Goo Mee [My Country’s Got...] , a rap song slamming the junta government, has garnered more than 14 million views on YouTube after it topped Thailand’s iTunes download list on Saturday. The song shows several rappers singing about social and political ills. Many criticisms target the junta government.

“The parliament house is the soldier’s play yard. The charter is written and erased by the Army’s boots,” the song says.

“The rap song destroys the image the military government had forced into people’s minds – that they are the heroes who return happiness to the country,” Chulalongkorn University philosophy professor Soraj Hongladarom tweeted on Friday. He was alluding to the pro-military song “Return Happiness to the People”, written by Prime Minister and head of the National Council for Peace and Order Prayut Chan-o-cha himself which airs every day on all Thai TV channels. The song presents the Army as a firefighter who comes to put out the fire of conflicts and brings happiness back to the country. It also asks the people to have faith and be patient.

“I have put up with the “Return Happiness to the People” for the whole four years. The lyrics is even more deceiving. Prathet Goo Mee is only 5 minutes long, but they [the military government] can’t stand it. This song is the fruit of repression of the people who have been gagged by the NCPO,” a 23-year-old fresh graduate, who asked not to be named, told The Nation.

“The song reflects the reality of Thai society and fulfils the spirit of a hip-hop song – to talk about oppression and inequality,” said Thitinai, a student at a top Thai medical school.

Asked which part of the lyrics reflected the reality, he said, “The country that points a gun at your throat. Claim to have freedom but have no right to choose. You can’t say shits even though it’s full of your mouth. Whatever you do, the leader will see you.”

A female college student told The Nation she was afraid to speak her mind and reveal her identity. “I think the song expresses my anguish as a Thai. I was like ‘yeah it is Thailand. Yeah it is my country I am born in. I feel powerless as a Thai person under repeated corrupt governments. I am afraid even to speak what I am thinking.”

We are not seeing a fight of guns, but a fight of songs, said the leader of the Future Forward Party, Thanathorn Juangroongruangkit.

He said the Prathet Goo Mee song has “unveiled” the situation in which “dictators” use soft culture like songs to make people unaware that they are being oppressed. What Prathet Goo Mee does is to unveil that, he said.

Natee Ekwijit, a famous Thai rapper and member of the Buddha Bless band, said freedom has its limit and that not all of the song’s lyrics are correct, especially the part that says “The country where the panther was slain by rifle”.

“If they [the rappers] had done more research on the black leopard case, they would have known the case is now in court,” he said, referring to the high-profile case of top businessman Premchai Karnasuta, who faces poaching charges related to his hunting expedition in Thungyai Naresuan Wildlife Sanctuary. Natee wrote there are “dictators disguised in democracy” and that “democratic governments also censure media”.

This morning, Pol Maj-General Surachet Hakpan, deputy director of the Technology Crime Suppression Division, said police would be able to identify the rappers within a week and would press charges against them.

Police believe the rappers’ actions could have violated the Computer Crimes Act, which prohibits computer information inconsistent with the truth, undermines national security or causes public panic. The maximum penalties are a five-year jail term and a fine of Bt10,000.