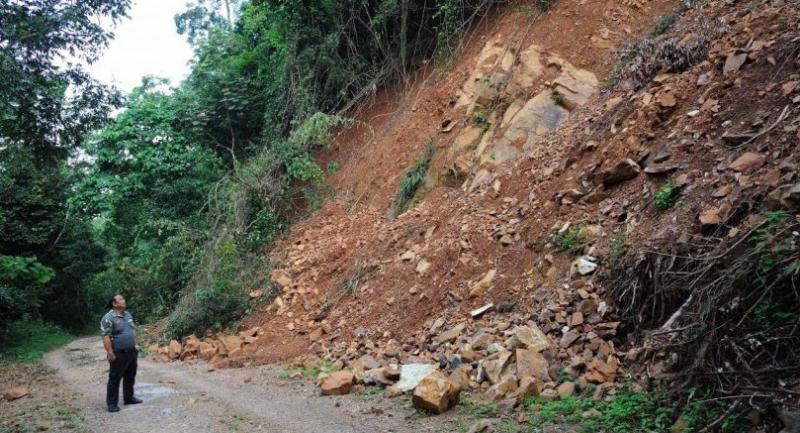 The photo of the latest condition of the road running to Phanoen Thung, taken on the first day of the tourism season, Nov 1.

THE NATIONAL Parks Department has ordered suspension of the road surface improvement project planned for the damaged 18km asphalt route running to the famed Phanoen Thung mountain top in the heart of Kaeng Krachan National Park in Phetchaburi province.

Thanya Nettithammakul issued the press statement late on Saturday night after some conservation groups organised an event in Bangkok to express their opposition to the project and threatened to petition Prime Minister General Prayut Chan-o-cha.

“The National Parks Department has ordered the project to be put on hold, and at this point the hired construction firm has not yet entered the compound to start construction. It has been informed that there is opposition to the project and therefore it is not yet allowed to enter the compound and start work,” the statement said.

The department has also invited concerned groups to come forward and discuss the best way out of the situation, according to the statement.

Thanya explained that the project was conceived on the same old road, which is heavily damaged.

The road was built around 30 years ago as the strategic route for park protection and regular patrols while enabling a visit to Phanoen Thung, the highest mountain located in the middle of the park.

The road surface improvement would not change the width of the road – four metres – but help strengthen it with concrete and flood diversion channels alongside, the statement said.

This was aimed at ensuring the safety of visitors as well as park rangers, who rely on the road to patrol the park’s boundaries, Thanya said.

As for concerns about the impact on wildlife, he said, various remedial measures would be implemented to offset it after completion of the project.

This would include limiting the number of visitors and vehicles, restricting speed and access times, and the installation of barriers and warning signs to ensure motorists do not drive at high speed along the section.

Some of these measures are already in place and the department has received no reports of road accidents involving wildlife there in the past two years, the chief said.

And during the construction period, the firm would be under the park’s directive to ensure that it does not cause impacts on wildlife.

Park officials proceeded with the project on the authority of the National Parks Act and had been in consultation with their advisory committee, Thanya said.

As for concerns about the impact on its World Heritage status, the chief said the park was still on the waiting list and there was no need at this stage to report to the World Heritage Committee about developments in the park.

He believed the project would not affect the “outstanding universal values” proposed for World Heritage status.

Dr Runsarit Kanjanavanit, a noted conservationist and a vice president of Seub Nakhasathien who has been vocal in his opposition to the project, pointed out during a photo exhibition and seminar about the project on Saturday afternoon that the route cuts through the heart of the park.

That’s the reason the project is sensitive and deemed inappropriate without proper consultation, he |said.

He said the project was being pursued without proper public consultation.

Road construction in the forest generally has an impact on wildlife because their habitats have become fragmented.

The animals are forced to change their behaviour and some die in road accidents.

Disturbances are no less critical factors to their survival and any visitor controls claimed to be effective have so far been seen as ineffective in Thai national parks, Runsarit said.

“I actually sympathise with the authorities. Why can’t we help one another and work together? Our goal is conserving our ecosystem so it can be sustained and provide ecological services. This place is really among our final frontiers,” said Rungsarit, adding the groups did not want to keep opposing the plan, but rather urged the responsible agencies to delay the project and come up with alternative solutions.